Governor of Japan’s Kanagawa Prefecture on November 18 said he cherished the relationship between Hanoi and the prefecture in terms of culture and people exchange.

The relations between Kanagawa Prefecture and the authorities and people of Vietnam and Hanoi, in particular, have seen strong development in recent years, he told a meeting with Chairman of the Hanoi People’s Committee Tran Sy Thanh.

The two sides have held many events, including the Kanagawa Vietnam Festival which was first launched in 2015, while Japanese authorities also launched the annual Kanagawa Culture Festival in Hanoi in 2018 and 2019, Kuroiwa Yuji said.

In 2022, Hanoi will resume the event after it was postponed for two years due to the Covid-19 pandemic, the Japanese governor said.

The Kanagawa Culture Festival 2022 opened on November 18 and the three-day event will end on November 20, 2022.

The Governor of Kanagawa Prefecture appreciated that the authorities of Hanoi have made great efforts to support the event, which promotes not only cultural and people exchanges but also offers an opportunity for Japanese and Vietnamese companies to seek cooperation opportunities.

Tran Sy Thanh, Chairman of the Hanoi People’s Committee, said that Hanoi highly values the relationship with Kanagawa Prefecture and that the exchanges in culture, trade, people, and businesses will further improve the bilateral relations.

"Japan is one of Vietnam and Hanoi's major trading partners, but the two sides' cooperation has not been commensurate," he said.

The Hanoi chairman said that the city authorities are willing to foster the relationship with Kanagawa Prefecture.

“Hanoi will seek further opportunities to learn the experiences of Kanagawa Prefecture in dealing with an aging population and climate change, improvement of education and tourism, and facilitation of a good business environment, so that Hanoi becomes a worth-living city,” Thanh pledged. 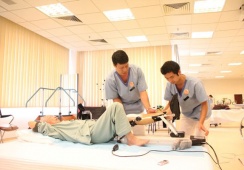 Japan supports Hanoi-based hospitals in training of rehabilitation for elderly