The five-day visits of Vietnam’s National Assembly Chairman Vuong Dinh Hue to Hungary and the UK marked a new milestone in bilateral relations, eventually contributing to the Vietnam-EU partnership.

Boosting cooperation between Vietnam and Hungary, the UK

The Chairman’s official visit to Hungary was significant amid the 72nd anniversary of diplomatic relations and approaching the five-year mark of the comprehensive partnership (2018 – 2023).

In addition, Hungary was Vietnam’s first comprehensive partnership in Central and Eastern Europe, as the former has been actively supporting Vietnam in both multilateral frameworks and also in Vietnam-EU relations.

“The chairman's visit remains significant in boosting bilateral relations and further deepening Vietnam-Hungary partnership in particular, and with European countries, in general,” he added.

Both sides have signed a cooperation agreement in the next phase between the two parliaments, in which the partnership between the two legislative bodies would be seen as an example and a key pillar in the overall bilateral relations.

During his time in Hungary, Hue and his Hungarian counterpart László Kövér co-chaired a legislative conference to discuss the legal framework for greenhouse gas emission reduction, renewable energy, and a green economy.

Minister of Justice Le Thanh Long said recommendations from experts at the conference would contribute to Vietnam’s law-making process toward the realization of its commitments at the COP26.

Meanwhile, the NA Chairman’s visit to the UK was ahead of the 50th anniversary of diplomatic relations (1973-2023).

“The visits ended on a successful note and no doubt would bring new momentum for the strategic partnership between Vietnam and the UK,” Long said.

Socio-economic recovery is high on the agenda

Among the key objectives of these visits was to ensure the effective implementation of the EVFTA and the UK-Vietnam Free Trade Agreement (UKVFTA), which would later contribute to socio-economic recovery for all parties involved in the post-pandemic period.

In Hungary, both sides held an economy-trade-investment conference. “With the EVFTA in place, there would be a new development in economic cooperation,” said Vietnam’s Ambassador to Hungary Nguyen Thi Bich Thao.

A similar conference had also been held in the UK with the participation of over 200 delegates. NA Chairman Hue also attended meetings with executives of major corporations and financial institutions in the UK.

In her remarks at the Vietnam-UK economic forum, UK Secretary of State for International Trade Anne-Marie Trevelyan noted Vietnam is one of the most dynamic economies in the world as the country is on track to reach a GDP growth of around 6% this year.

The UK trade minister said that it is not a surprise Vietnam is among the world’s front-runners in the ongoing shift of global investment capital inflow, and a prime example as Southeast Asian countries would be the growth engine for the world economy.

She referred to an analysis that by the end of this decade, Vietnam would be among the top 30 largest economies in the world.

In this regard, Trevelyan said the UK wants to be a part of Vietnam’s development story in the 21st century, and trade relations with Vietnam are a priority in the UK’s trade policy.

Among key priorities, cooperation in education has also been a focus in the visit of Vietnam’s delegation to both the UK and Hungary.

At the Vietnam-UK education cooperation forum, Chairman Hue said education remains a key national policy and is considered among the three breakthroughs for Vietnam’s socio-economic development.

According to Hue, the quality of the workforce would be the decisive factor for Vietnam to move forward, as such, the Vietnamese National Assembly has been allocating 20% of the national budget to education and training.

Deputy Speaker of the House of Commons Nigel Evans echoed Hue’s view by saying education would continue to be the top priority in bilateral partnership.

Evans pointed out to over 12,000 Vietnamese students currently studying in the UK, while British investors have had 40 foreign direct investment projects in the country.

In 2020, Vietnam and the UK signed a joint declaration, in which the latter affirmed its commitment to supporting to an education reform strategy in Vietnam.

Minister of Education and Training Nguyen Kim Son said education not only is significant for Vietnam to recover from the pandemic, but also to ensure its long-term prosperity.

“Vietnam’s fast pace of economic growth along with the ever-expanding business community means a high demand on the labor market, for which cooperation between Vietnam and partners in education should be a focus in the coming time so that the country would have a sufficient labor force in support of economic development,” Son said. 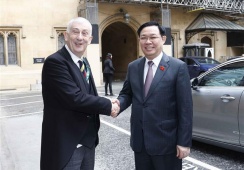 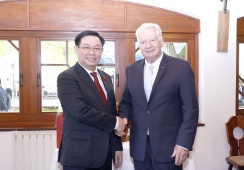