The Politburo, the country’s supreme decision-making body, is set to discuss the investment plan for the North-South express railway project in September.

A feasibility study conducted by the Ministry of Transport (MoT) suggested constructing a new electrified 1,435mm double-track express railway on the North-South axis with a total length of 1,545 kilometers. The high-speed rail route will be operated by an electric multiple units (EMU) train with an average speed of 320 kilometers per hour.

The MoT estimated the total investment capital to be around US$58.71 billion, in which $1.98 billion would be allocated for site clearance, $31.58 billion for construction cost, $15 billion for equipment and project management, and nearly $10 billion for contingency and other expenses.

To ensure the effective implementation, the MoT proposes that the construction be conducted in phases.

The first phase with section Hanoi - Vinh and Nha Trang – Ho Chi Minh City has a length of 665 kilometers and an investment capital of $24.72 billion.

In the second phase, the section Vinh – Nha Trang with a length of 894 kilometers and investment capital of $34 billion will be built. In which, the Vinh – Danang section is scheduled to complete by 2040, and the final  Danang – Nha Trang  section by 2045-2050.

The Ministry of Planning and Investment (MPI) in an appraisal process of the feasibility report noted the project is of large scale, uses sophisticated technologies, and with significant impact on socio-economic development, therefore, it would require a thorough review on several issues, including the connectivity with other transport modes domestically and abroad; total investment capital and financing mechanism.

Given the expectation that the North-South express railway would be completed by 2050, Vietnam would have a network of 25 rail routes with a total length of 6,354 kilometers, including those starting from Hanoi, Ho Chi Minh City, or those connecting between seaports, industrial parks, and economic zones.

This would consist of seven existing rail routes with a length of 2,440 kilometers and nine new routes of 2,362 kilometers. 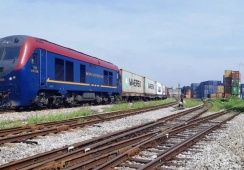 Vietnam railway set for breakthroughs in 2022