Housing investment is to meet people’s long-term needs and would suffer no impacts from external factors, such as the pandemic.

The property market in Hanoi this year is set to continue witnessing an imbalance given the scarce supply, and therefore would further drive up the prices.

Nguyen Quoc Hung at CT4 Linh Dam Building (Hoang Mai District, Hanoi), said his family bought an apartment of 70 square meters in early 2021 at the price of VND1.6 billion (US$70,562). One year later, there have been buyers asking for the 10-year old apartment with a proposed price of VND1.8 billion ($79,400).

“We did not intend to resell the property, but given the high selling price, we may consider the proposal,” Hung told The Hanoi Times.

Such a trend is quite common in Hanoi’s current real estate market. A report from Savills Vietnam in 2021 suggested housing prices in Hanoi are rising compared to the previous year, in which the apartment segment rose by 9-15% in prices.

The number of transactions of class B apartment hovered around VND35-46 million ($1,550 – 2,030) per square meter, accounting for 52% of the sold volume and mainly concentrating at Nam Tu Liem, Cau Giay, Thanh Xuan, Long Bien, and Gia Lam.

Meanwhile, segments of villas, shops- and townhouses witnessed a strong rise in prices. The average price of villas was estimated at VND180 million ($8,000) per square meter, representing an increase of 82% year-on-year, while that of townhouses climbed by 54% to VND171 million per square meter, and shophouses to VND239 million, up 30%.

“In late 2021, the fact that the market showed signs of recovery, as well as local property developers and well-known property management providers, have been collaborating to work on high-class projects further pushed prices in this segment upward,” said Do Thu Hang, senior director of Advisory Services at Savills Hanoi.

Meanwhile, Hang expected demand for affordable apartments would continue to rise due to a shortage of supply.

Indeed, data from the Vietnam National Real Estate Association (VNREA) showed the housing supply in Hanoi has been on the decline and remained at a five-year low.

“This was among reasons that helped heat the market up in the final months of 2021 following a long period of low activity due to lockdowns,” it added.

In the fourth quarter of 2021 alone, the number of transactions of villas and townhouses surged at 96% year-on-year while apartment trading rose 72%, stated the VNREA.

It is estimated that the population in Hanoi would reach nine million in 2025, 61% of them would live in urban areas, representing a demand of 72,000 new households per year.

The figure is significantly higher than the average number of new apartments at 27,000 units per year.

“The shortage of affordable apartments is especially severe with almost no new projects of apartments with price below VND20 million per square meter,” Vice General Director of VNREA Nguyen Van Dinh told The Hanoi Times, explaining why old apartments are becoming hot properties at the moment in Hanoi.

“Housing is to meet people’s long-term needs and would suffer no impacts from external factors, such as the pandemic. Market price, therefore, is less affected by other factors and would remain on the upward trend,” Dinh noted. 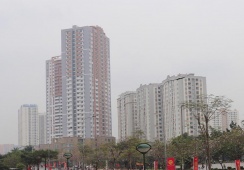