Vietnam urged China to refrain from further complicating the situation and not to expand disputes in the South China Sea.

Vietnam has expressed concerns over recent complicated movements in the South China Sea, and demanded China to respect its legitimate rights and interests there.

The two countries need to restrain themselves from realizing activities that further complicate the situation, not to expand disputes in the South China Sea, and maintain peace and stability in the sea, Vietnam's Deputy Prime Minister and Minister of Foreign Affairs Pham Binh Minh said at a virtual meeting Tuesday.

At the 12th Meeting of the China-Vietnam Steering Committee for Bilateral Cooperation, the top diplomats of Hanoi and Beijing frankly discussed the situation in the South China Sea over the past time and differences in maritime issues, Vietnam’s Ministry of Foreign Affairs said in a statement.

The event was co-chaired by Vietnamese FM Pham Binh Minh and his Chinese counterpart Wang Yi with the attendance by representatives of different Vietnamese ministries and leaders of Hanoi, Haiphong, and seven northern provinces bordering China.

At the meeting, Hanoi and Beijing agreed to closely follow the consensus by the two countries’ leadership on fundamental principles relating to maritime issues between Vietnam and China; comply with international law, especially the United Nations Convention on the Law of the Sea (UNCLOS) 1982; and go on with substantive dialogues on maritime issues and negotiations on the Declaration of Conduct (DOC) in the South China Sea and the Code of Conduct of Parties in the South China Sea (COC).

Since the 11th meeting in September 2018, the two sides have recorded some results on less sensitive issues at sea.

In a latest move related to the disputed sea issues, the US has ended its neutrality over territorial disputes pitting China against Southeast Asian states in the South China Sea, saying that Beijing’s claims in most of the sea are “completely unlawful.”

In response to Washington’s crystal clear statement on the South China Sea, Hanoi said it welcomes countries’ positions on the sea and hopes that other nations to contribute to the maintenance of peace, stability, and cooperation in the sea.

As such, America’s decision to flip its policy on the South China Sea could give Vietnam a new line of defense, according to Asia Times.

“Vietnam’s objective [in a conflict scenario] would be to bring China to a negotiating table and maintain the status quo as far as possible,” Asia Times quoted Bill Hayton, a South China Sea expert at UK-based think tank Chatham House, as saying.

This month, the USS Ronald Reagan and USS Nimitz and four other warships sailed to the South China Sea for maneuvers, representing the first dual-carrier operations in the area since 2014. 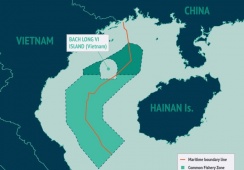 Vietnam, China continue negotiating on delimitation of Gulf of Tonkin