The completion of ring roads No.3.5 and 4 would open up a new development space, driving the formation of large-scale polycentric urban areas to ease overloaded infrastructure in Hanoi’s downtown.

Two ring roads, No. 3.5 and 4, are expected to be game-changers further to expand the development space of the Hanoi Capital Zone.

In June, the National Assembly approved a resolution on the construction of Ring Road No.4 with a total length of 112.8 kilometers and an investment capital of VND85.8 trillion (US$3.7 billion).

Running through Hanoi (58.2 kilometers), Hung Yen (19.3 kilometers), and Bac Ninh (25.6 kilometers), the ring road is expected to bolster regional connectivity between Hanoi and the northern provinces in the Hanoi Capital Zone.

The Government later set a timeline for the project to start construction in June 2023 and be completed by 2026.

Ring road No.3.5, costing over VND1 trillion ($42.2 million), remains a priority infrastructure project for Hanoi as the project helps connect the North and South of the Red river, forming a corridor in the west of Hanoi.

According to experts, the two ring roads would not only complete the road infrastructure of the Hanoi Capital Zone by providing connectivity to 10 provinces/cities in the North but also the platform for Hanoi to access economic zones and maritime and air transport hubs in the surrounding areas.

Thien added that once the two ring roads are completed, this would significantly boost the development of new industrial zones and logistics services in the areas.

In terms of transport infrastructure, the region boasts one of the largest and most modern road networks in the North, with a series of highways and national roads.

In the East, the Eastern region connects to the Hanoi – Haiphong - Ha Long – Mong Cai highway and No.5 national road; the Hanoi-Thai Nguyen, Hanoi – Bac Ninh – Bac Giang – Lang Son, and Hanoi – Lao Cai expressways in the North; the Cau Gie – Ninh Binh and national road No.1A in the South.

Such a network means quick and convenient access to Noi Bai International Airport, Cat Bi Airport, or Haiphong seaport, not to mention dozens of bridges narrowing the geographic distance between the two sides of the Red River.

In addition to the Chuong Duong, Vinh Tuy, Thanh Tri, and Nhat Tan bridges, construction of Phase 2 of the Vinh Tuy Bridge is 70% complete and is scheduled to go into operation in the third quarter of 2023.

The vast development in transport infrastructure in the Eastern region of Hanoi has also been a pulling factor for major real estate developers, such as Vingroup and Ecopark committing projects worth up to billions of US dollars.

Dinh expected transport infrastructure to facilitate urbanization and the development of the real estate market.

“Areas surrounding the ring roads No.3.5 and 4 are set to receive a major uplift, which has happened with those near ring roads No.2 and 3,” he said. 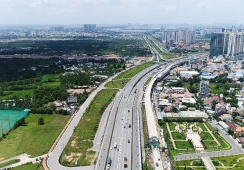