Chaired by Prime Minister Pham Minh Chinh, the fabulous opening ceremony of SEA Games 31 aims to introduce to domestic and international audiences the colorful culture and friendliness of the Vietnamese people.

The opening ceremony of the 31st Southeast Asian Games (SEA Games 31) will be held on May 12 with the participation of over 1,000 artists at My Dinh Stadium, Hanoi, according to the Ministry of Culture, Sports and Tourism.

“Taking the image of bamboo and wet rice as the main themes, the event will be a colorful performance of light and sound technology, introducing audiences at home and abroad to the culture, tradition, and people of Vietnam while conveying the spirit and the theme of the Games ‘For a Stronger South East Asia’,” the document of the ministry wrote.

Accordingly, the ceremony will feature three parts themed ‘Friendly Vietnam’, ‘Strong South East Asia’, and ‘Shining South East Asia’. The 120-minute artistic performance program with the aid of sound and light technology will be directed by Tran Ly Ly - Acting Director of the Performing Arts Department under the Ministry of Culture, Sports and Tourism.

According to the organizers, the stage is designed with 44 projectors for demonstrating projection mapping technology.  The stadium pitch will be turned into a display surface.

“Millions of TV viewers and thousands of spectators at My Dinh Stadium will have the opportunity to ‘hear’ local artists tell stories about the history of Southeast Asia, including Vietnam, with the aid of technology. Through our vivid performances showing the friendliness and amiability of Vietnamese people, we wish to invite international friends to visit our beautiful country,” Ly Ly said.

The stories of bamboo and wet rice culture

On the tech stage, viewers will be able to watch vivid 3D images of the rice plants - the symbol of Southeast Asian wet rice civilization and bamboo trees - representing the flexibility and resistance of the Vietnamese people. These featured images will be interspersed with singing and dancing performances of the artists.

General director Tran Ly Ly said that more than 1,000 actors will be mobilized for the mass games scene, while each smaller performance will need more than 200 actors and actresses.

“The magical light will add up impressive factors to the opening ceremony of SEA Games 31, kicking off the largest sporting and cultural event in the region,” she added.

In addition, the entirety of stand B will be used as the main stage.

According to the program, following the parade of athletes from the 11 participating countries into the stadium, Vietnamese Prime Minister Pham Minh Chinh will declare the opening of the event. Eight athletes will then light the SEA Games cauldron to signal the official opening of the SEA Games 31.

It will feature 40 sports with 526 medal events and is expected to attract around 10,000 athletes and officials from 11 Southeast Asian countries. 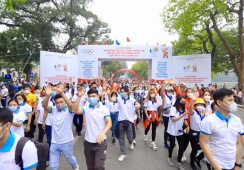 SEA Games’ flag raising ceremony to take place this May 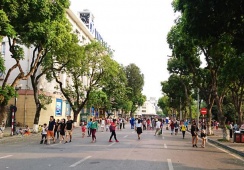