As of February, Vietnam disbursed around $2.7 billion in FDI, a sharp rise of 7% against the same period of last year.

Singapore overcame Japan as Vietnam’s largest source of foreign direct investment (FDI) with registered capital of over US$1.7 billion as of February 20, according to data from the Foreign Investment Agency (FIA).

The leap was made after Singapore injected nearly $941 million into the urban infrastructure and services project of Vietnam-Singapore Industrial Park (VSIP) Bac Ninh.

South Korea ranked second with $1.5 billion during the two months but remained the largest investor to date with over $78.4 billion, or 18.7% of total FDI to Vietnam.

Meanwhile, Japan after many years as the second-largest investor to Vietnam has now been relegated to the third position by Singapore. The FDI from Japan to Vietnam slowed down since 2020, which was in contrast with the rising capital inflow from Singapore.

As of February, Vietnam disbursed around $2.7 billion in FDI, a sharp rise of 7% against the same period of last year.

Investors have poured money into 17 out of 21 fields and sectors, in which manufacturing and processing led the pack with investment capital of $3.1 billion, accounting for 63% of total registered capital. Real estate came second with $1.5 billion, or 30%, followed by science and technology development with $110 million.

Major projects in the first two months of 2022 include the $941 million urban infrastructure and services project of Vietnam-Singapore Industrial Park (VSIP) Bac Ninh from Singapore, an addition of $920 million by Samsung Electro-Mechanics Vietnam in its project in Thai Nguyen Province; and an increase of nearly $306 million from Hong Kong investors to the manufacturing plant of electronics equipment and appliances in Bac Ninh.

Among 63 cities and provinces having received FDI to date, Ho Chi Minh City has attracted the largest portion of capital commitments with $52.8 billion, or 12.6% of the total. Binh Duong came second with nearly $37.8 billion (9%), followed by Hanoi with $37.6 billion (9%). 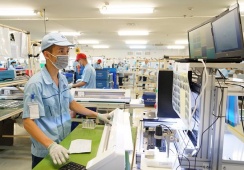 FDI to Vietnam set for booming period in 2022 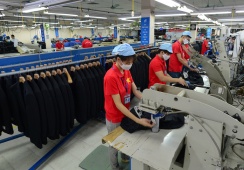 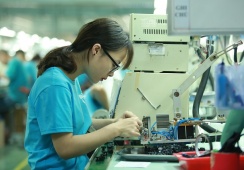