Son Tay Town celebrates the establishment of the ancient citadel

As one of the four major outposts of ancient Thang Long, the ancient citadel of Son Tay helped defend the capital from attack.

Authorities and people of Son Tay Town in Hanoi on November 12 celebrated the 200th anniversary of the ancient Son Tay Citadel with a series of investment and tourism activities.

The event aims to raise awareness and responsibility among young generations for preserving historical and cultural heritage.

In addition, visitors will learn about the distinctive characteristics of the fortress. On this occasion, Son Tay Town will promote local tourism activities to contribute to the socio-economic growth in Hanoi.

The event also features activities such as the exhibition of photos, archeological items, calligraphic writings, art performances, experiencing tours, and a balloon showdown that gives visitors a bird's eye view of the ancient citadel and Son Tay Town.

In addition, the local authorities have created a pedestrian street around the fortress, organized a workshop on its conservation, launched an itinerary connecting different areas of Son Tay, developed a conservation plan for the fortress, and applied for recognition as a particular national heritage site.

“The 200th anniversary of the establishment of the Son Tay Ancient Citadel is an important occasion, in which the locality will honor, introduce and promote distinguished values of the fortress as well as potential tourism activities around the town to the public,” Secretary of the Son Tay Town Party Committee Tran Anh Tuan said.

“We want to attract both domestic and international visitors to ‘the holy land’, develop the local socio-economic conditions, and provide a boost for the capital city of Hanoi,” Tuan said.

According to Do Van Tru, chairman of the Vietnam Cultural Heritage Association, the ancient citadel of Son Tay presents a wide range of values in terms of history, architecture, construction technology, and strategic location.

Truong Quoc Binh, former deputy director of the Department of Cultural Heritage, said the ancient citadel of Son Tay is a renowned destination for lovers of history, culture, architecture, and the military. Some of their findings have enabled local authorities to study, preserve and promote existing and hidden values.

Located about 40 kilometers west of Hanoi, Son Tay Ancient Citadel was built in 1822 under the reign of King Minh Mang of the Nguyen Dynasty. It was when feudal nations in the East struggled against the expansion of colonialism from the West.

As one of the four major outposts of Thang Long (the old name of Hanoi), Son Tay Ancient Citadel served as the guardian that helped defend the capital from being attacked and assisted the central government in controlling surrounding areas.

Built of laterite, the ancient citadel of Son Tay presents the spirit of the Vietnamese people fighting for their sovereignty, independence, and freedom and is an icon that honors Vietnamese fortification arts.

Tong Trung Tin, chairman of the Vietnam Archaeology Association, told the Vietnam News Agency that at the ancient citadel of Son Tay, the remains are the little evidence left of Vietnamese construction techniques, as most of the site has been destroyed by time and wars.

According to Nguyen Huy Khanh, former chairman of the Son Tay City People's Committee, the fortress is the convergence of the values of culture, history, architecture, and ecology that have been preserved for a long time.

"Many visitors have come and enjoyed the time at the relic and the pedestrian street. Most of them come on weekends," Tuan said.

According to the local government, more than 250,000 visitors have visited the old fortress and the pedestrian street four months after its launch. 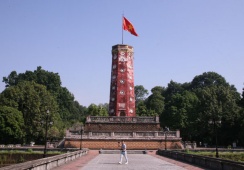