A winter monsoon and strong cold spells are forecast to hit northern Vietnam, including Hanoi, on January 28 night and are likely to last through the Tet holiday, according to the National Centre for Hydro-Meteorological Forecasting (NCHMF).

The monsoon will bring showers and low temperatures across the northern region, the NCHMF said, adding that Hanoi may also be struck by thunderstorms and hailstorms, with whirlwinds, lightning, hail, and strong winds.

Hanoi will start experiencing biting cold weather from January 29. More cold air will bring temperatures in the city down to 9-11 degrees Celsius, with the highest temperature during the day at around 16 degrees, the center forecast.

It noted that Hanoi will experience a maximum temperature of 17 degrees on Saturday [January 29] and 12 degrees on Sunday. Night-time temperatures would be in the 10-12 degrees Celsius range.

The lowest temperatures in mountainous areas will be 7 to 10 degrees Celsius and below 5 degrees Celsius on high mountains, with chances of sleet and frost, the NCHMF stressed.

People are advised to stay updated on the weather forecast and keep warm, especially the elderly and children in the mountainous regions.

A similar weather pattern will also occur from Thanh Hoa Province to Thua Thien-Hue Province in north-central Vietnam during this period. The temperature in these localities will range from 13 to 23 degrees Celsius.

Tet holiday, or the Lunar New Year Festival, is one of the most anticipated celebrations of the year among Vietnamese and expats thanks to the beautiful traditional values, singular and meaningful rituals. It runs this year from January 29 to February 6. 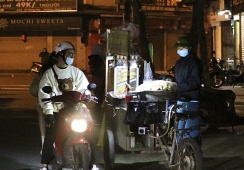