Multinational companies have more favorable conditions in exercising tax avoidance, and to a larger extend, tax evasion, compared to their peers in the state and private sectors.

Tax evasion and avoidance practices are causing annual losses of up to VND20.7 trillion (US$885 million) to Vietnam’s tax revenue during the 2013 – 2017 period, according to Nguyen Thi Thu Huong, senior governance program manager of Oxfam in Vietnam.

Such losses accounted for nearly 10% of total revenue from corporate tax, and four times higher than the amount of tax arrears retrieved by the General Department of Taxation every year, said Huong at an online workshop on April 28.

“This is despite the growing importance of tax revenue as a source for development, poverty reduction and social equality,” Huong said.

Huong attributed the country’s generous tax incentives and tax fraud practices to declining revenues. This has put more burden on other components of the economy, including the middle-income classes and the poor.

Nguyen Hoang Anh, lecturer at the National Economics University, said tax evasion and avoidance is a common issue globally, especially in countries with high level of economic openness like Vietnam.

However, compared to the state and private sectors, the foreign-invested sector has more favorable conditions in exercising tax avoidance, and to a larger extend, tax evasion, Anh added.

Anh said multinational companies have established branches abroad, and then diverted profits from countries with higher tax rates to those with lower ones.

A report from the Vietnam Institute for Economic and Policy (VEPR) during the period suggested while the FDI sector expanded its workforce at a rate of 45.9%, higher than the state and private sectors at 36.8% and 26.8%, respectively, the FDI sector had the highest rate of enterprises reporting losses at 46.3%.

To tackle tax evasion and transfer pricing, Thanh said Vietnam is considering to lower corporate tax, which could also be seen as measure to compete with neighboring countries for foreign investment capital inflow.

However, Thanh warned Vietnam could enter a race to the bottom among countries in the Southeast Asia in terms of incentives to attract investment.

Regarding this issue, Huong from Oxfam said Vietnam could eliminate some of the current tax incentives after having conducted an impact assessment.

Additionally, as the chair of ASEAN in 2020, Vietnam should put the issue on agenda to raise awareness and debate the issue of tax competition and tax incentives at regional level, Huong concluded. 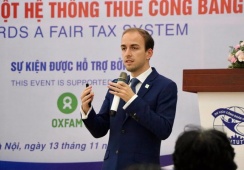