The prime minister held meetings with executives of US major financial corporations such as KKR, Visa, S&P, and Citigroup over future cooperation in the financial sector.

The comprehensive partnership between Vietnam and the US would create favorable conditions for investment activities.

Prime Minister Pham Minh Chinh stressed the view during meetings with executives of US financial corporations on May 16.

Joseph Bae, the CEO of Kohlberg Kravis Roberts (KKR), said the investment fund is looking to expand its presence in the fields of real estate, infrastructure, digitalization, and technologies in Vietnam.

According to Bae, KKR is one of the largest private equity managers in the world with assets of US$470 billion. So far, the corporation has invested over $1 billion in three companies in Vietnam.

Bae said Vietnam remains an attractive investment destination with favorable supporting policies from the Government, a strategic geographical location, and a dynamic population.

For his part, Chinh welcomed the investment activities of KKR in Vietnam, especially in the country’s priority fields.

The prime minister expressed confidence in Vietnam’s bright prospects with a record $1.3 billion poured into startups in 2021 despite the pandemic.

Chinh added the Government is stepping up efforts in ensuring a transparent legal framework in the fields of energy and digital infrastructure to further attract investment capital.

CEO of Visa Alfred Kelly revealed his impression of Vietnam’s dynamic development and its effective measures to contain the pandemic and subsequent economic reopening.

Kelly highlighted Vietnam’s initiative for a non-cash payment society by 2027, which is plausible given the expansion of cashless payments from 8% in 2020 to 28% in 2021.

For his part, Chinh highly regarded Visa’s role in contributing to Vietnam-US relations during the past 20 years and looked forward to the firm's greater role in promoting Vietnam's stable and sustainable financial system.

Chinh informed that Vietnam has put in place the non-cash payment strategy for the 2021-2025 period, calling for Visa to work with the State Bank of Vietnam in realizing the plan.

In separate meetings with representatives of S&P, the prime minister noted Vietnam aims to promote a transparent and sustainable capital market, urging S&P to support the country in the credit rating for local businesses. 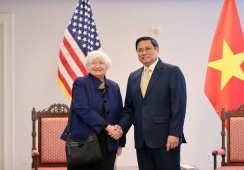 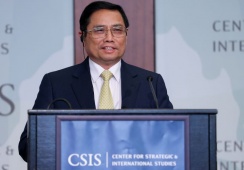