In the latest petrol price adjustment period on August 22, the domestic retail prices were back on the upward trend following five consecutive cuts in July.

Vietnam's Ministry of Industry and Trade (MoIT) has instructed major petrol distributors to ensure sufficient supplies of oil and gas in anticipation of rising demand in the upcoming major holiday - the National Day on September 2.

Under the instruction, the MoIT called for measures to avoid disruption of the oil supply for filling stations nationwide.

“Major distributors are responsible for keeping sufficient inventory, sourcing from imports if necessary, to meet domestic demand,” stated the ministry.

The MoIT requested its agencies in localities to closely monitor the petrol supply-demand, including the operation of petrol stations to avoid shutdown for no justifiable reason.

In the latest petrol price adjustment period on August 22, the domestic retail prices were back on the upward trend following five consecutive declines in July.

Compared to late June, the prices of each liter of RON95-III declined by VND8,210; E5-RON92 down by VND7,580, and diesel by VND6,200, or around the level before the outbreak of the Russia-Ukraine conflict in late February. 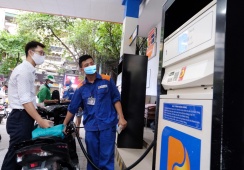