The Ministry of Transport expects to draw out some VND7 trillion (US$286.6 million) to pay off defaulted loans from Korean and German financers in the construction of the Hanoi-Hai Phong Expressway.

The Ministry of Transport has requested the Ministry of Planning and Investment allocate more than VND7 trillion (US$286.6 million) to pay off defaulted loans in the construction of the Hanoi-Hai Phong Expressway.

Of the figure, nearly VND4.7 trillion will be spent to pay off the principal from the Export-Import Bank of Korea, and the rest of more than VND2.33 trillion will be paid to the German Development Bank.

In a recent request, the Ministry of Transport asks the Ministry of Planning and Investment to submit its proposal to the Prime Minister and the National Assembly Standing Committee for feedback and approval.

The proposal aims to include the payoff amount in the medium-term public investment plan 2021-2025 according to the policy of allowing the transfer of on-lend and government loan guarantees into state budget allocation, as approved by the National Assembly in Resolution 63/2022/QH15 dated June 16, 2022.

Accordingly, the settlement of the loans for the South Korean and German banks will be recalculated based on the current foreign exchange rates.

The Hanoi-Hai Phong Expressway was finished and operational in 2015 with a total investment of nearly VND45.5 trillion. Running 105.5 kilometers, the expressway connects the capital city of Hanoi with the northern port city of Hai Phong.

The expressway is designed with six lanes, two emergency lanes, and a maximum speed of 120 kilometers per hour. A 164-kilometer-long network of frontage roads is constructed to allow better connection between the two cities and other provinces along the expressway. 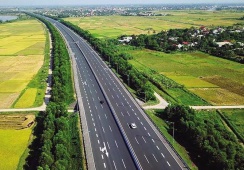 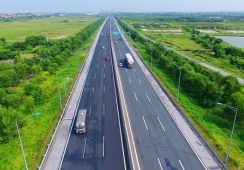 Vietnam accelerates construction of 5,000 kilometers of expressways by 2030