Customers are paying pork prices 40% higher than they should be.

Stabilizing pork prices is not only about cheapening the living cost, but also about harmonizing the mutual benefits between customers and producers, eventually leading to a sustainable pork market, according to Trinh Dinh Dung, deputy prime minister.

At a time when the Covid-19 pandemic is putting a great strain on the domestic economy, joint efforts from the business community and the public to alleviate pressure on the economy are important, Dung said at a meeting with animal husbandry businesses on March 30.

As per the government's instructions, many firms have reduce pork prices, but in some provinces and cities, prices of live hog remain as high as VND140,000 (US$5.9) per kilogram.

Vice General Director of C.P Vietnam Livestock Corporation Vu Anh Tuan said with a liveweight price of VND75,000 (US$3.16) per kilogram, the retail price should be around VND100,000 (US$4.22) per kilogram at the highest.

As customers are paying prices 40% higher than they should be, intermediaries are gaining an unfair share of profit, Tuan said.

Such a practice is causing damage to both customers and producers, as well as tax revenue losses.

Deputy PM Dung requested the Ministry of Industry and Trade to control prices of the supply chain and avoid cases of hoarding pork or hiking pork prices in intermediary channels.

The government has previously aimed to keep the live hog prices under VND60,000 (US$2.53) per kilogram in 2020 in a move to ensure the sustainable development of the pig farming industry and lower inflationary pressure.

Major firms in the industry, including C.P Vietnam, CJ Vina, Dabaco, Japfa Confeed, Emivest, and GreenFeed, have committed to comply with the government’s instruction in reducing pork prices.

A representative of the Ministry of Agriculture and Rural Development (MARD) said the ministry has been supporting enterprises to repopulate pig herds after the African swine fever, while pushing for pork imports to stabilize market prices at around VND73,000 – 76,000 (US$3.08 – 3.2) per kilogram.

Vietnam’s pig herd is around 24 million at present, equivalent to 74% of figure before the outbreak of the African swine fever.

The MARD estimated the country’s pork output in 2020 at 3.9 million. By the third quarter, the domestic pork supply could meet around 90% of the market demand. Vietnam to imports 100,000 tons of pork in Q1 to offset shortage 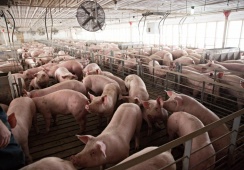