Vietnam and Africa bolster cooperation in agricultural trade and investment

Agriculture has been a prominent field in Vietnam-Africa cooperation with many projects in execution.

Vietnam would establish a cooperation center between Africa and Vietnam that is considered as the focal point to bolster agricultural cooperation with African countries.

He added the center will coordinate the implementation of cooperation activities with African countries, including the transfer of technology and farming techniques, trade promotion, and market survey in the agricultural sector between the two sides.

The Ministry of Foreign Affairs and a network of nearly 100 representative agencies around the world, including eight Vietnamese embassies in Africa, along with Vietnamese ministries, branches, localities, businesses, and African partners will create an enabling environment to further promote multi-industry cooperation between Vietnam and Africa, especially in agriculture.

At the conference, Minister of Foreign Affairs Bui Thanh Son said the agricultural sector has become a a prominent field in the Vietnam-Africa cooperation with dozens of projects implemented within the bilateral and multi-sided framework and actively contributed to the food security of many African countries. Vietnam and some African countries have also become each other’s leading trading partners in farm produce, typically rice, cashew, and coffee.

Assessing that Vietnam has an effective economic development model, Sierra Leone’s Minister of Agriculture and Forestry Abu Bakarr Karim said his country's agricultural sector will learn from Vietnam's experience, thereby reaching the goal of having a modern, value-added economy and becoming a middle-income country with a 10-fold increase in GDP by 2050.

Africa is a potential market for agricultural trade cooperation, especially after the African Continental Free Trade Agreement (AfCFTA) took effect from January 2021, promising to boost economic growth as well as trade within Africa and with partners, according to Abu Bakarr Karim.

According to the Vietnamese Ministry of Agriculture and Rural Development, the African continent with a population of more than 1.3 billion people and abundant land resources is a potential for comprehensive cooperation in the agricultural field between Vietnam and Africa. The ministry has sent many delegations to survey and build feasible projects in Angola, Tanzania, and Cameroon in the past.

However, this cooperation still faces many difficulties and obstacles including lack of information and in-depth understanding of each other's market, business practices and laws as well as geographical distance. Economic linkages between Africa and Southeast Asia including Vietnam are still weak.

Deputy Minister Le Quoc Doanh said the cooperation models between South Africa and Vietnam in the transfer of technological advances should be strengthened, as well as the application of science and technology in cultivation, husbandry, and aquaculture to contribute to ensuring food security for African countries.

“Vietnam is ready to send highly qualified experts and technicians to support African countries in this regard,” he said.

Vietnam has sent nearly 500 experts to assist the agricultural development in Mozambique, Benin, Guinea, and Senegal. With the help of Vietnamese agronomists, the productivity of rice, vegetables, and aquaculture in the pilot projects has increased. With the gradual transfer of technology, Vietnamese experts are contributing to supporting African countries to solve problems related to food security.

He underlined it is necessary to build a pilot model of public-private partnership (PPP) to invest in the production and processing of agricultural products in a number of African countries, with priority given to some strong Vietnamese industries such as rice, rubber, coffee, cashew nut, livestock, and aquaculture. 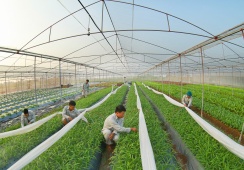