Vietnam calls for joint efforts to support women in Covid-19

Vietnam highlights the role of women in ensuring global security, economic growth, social progress, and overcoming the adverse consequences of the pandemic.

The efforts would help create jobs and bring income to women and girls in tough times amid the global health crisis, Anh Xuan made the statement at the 3rd Eurasian Women’s Forum themed “Women: A Global Mission in a New Reality” held in St. Petersburg on Oct 13–15.

Xuan’s suggestion is in line with the forum’s highlight that focused on the role of women in efforts to build a stable and secure future.

As the world faces new challenges and threats, Xuan said the common drive will help mitigate the impact resulted from climate change, environmental pollution, conflicts, violence, and terrorism on women and girls.

She highlights the role of women in the economic recovery with the engagement in implementing gender equality in policies; increasing women’s participation in leadership and all aspects of life; and promoting connection efforts in each country, region, and the world.

All the efforts are to achieve the gender equality goal in line with the United Nations 2030 Sustainable Development Goals (SDGs).

The third suggestion focuses on strengthening the relationship between the State sector and society, between the legislative and executive bodies to better policymaking and legal enforcement for the well-being of the people and the development of women.

The final approach that Xuan expressed is that each woman needs to actively learn to enrich their knowledge to nurture themselves for better contributions to society.

At the meeting marked the attendance of Valentina Matviyenko, Speaker of the Federation Council of the Federal Assembly of the Russian Federation, who initiated the 3rd Eurasia Women’s Forum, the Vietnamese Vice President shared Vietnam’s achievements in gender equality in all fields.

As a result, the rate of female lawmakers in Vietnam reaches more than 30%, in ministries and ministerial level 50%, in businesses 26.5% (the 6th highest rate among countries worldwide).

Internationally, Vietnam has offered different initiatives on empowering women during its term as the UN Security Council’s non-permanent member in 2020-2021, the ASEAN Chair 2020, and the 41st General Assembly of the ASEAN Inter-Parliamentary Assembly (AIPA-41).

The Eurasian Women’s Forum, which was firstly held in 2015 and 2018, has become the largest international platform uniting female leaders from all continents where they can discuss the role of women in the modern world and work out new approaches to solving global problems.

This year’s forum attracted the participation of delegates from more than 100 countries and 20 international organizations.

The forum has gained wide recognition as an effective mechanism of interaction and dialogue for women who are influencing social, political, and economic decisions. It facilitates the growing participation of women’s movements in resolving the global challenges of our time. 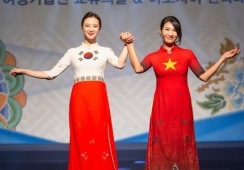