The interest rate cap for deposits with maturities of one month to less than six months has been lowered to 4% annually from 4.25%.

The State Bank of Vietnam (SBV), the country’s central bank, has announced the fourth policy rate cut  this year to support the economy amid Covid-19 impacts, scheduled to take effect from today [October 1].

As per the decision, a 0.5 percentage point reduction would be applied to the refinancing interest rate, discount interest rate, overnight lending rate, and interest via open market operations (OMO).

The deposit rate for maturities of over six months is subject to each credit institution’s decision on the basis of supply – demand.

With this move, this is the third time the SBV lowered its interest rate cap and the fourth cut of policy rates, following similar decisions in March, May and August.

Data from the General Statistics Office revealed the country’s credit growth as of September 22 stood at 5.12% year-on-year, far away from meeting the target of 14% set by the government for this year.

In late April, Fitch Solutions, a subsidiary of Fitch Group, revised down its credit growth forecast for Vietnam to 8% in 2020, from 11% previously, due to a sharp slowdown in economic activity amid the Covid-19 pandemic. 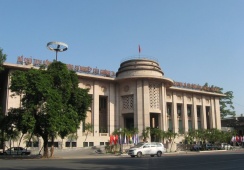