In the next 10 years, Vietnam will position itself as a major supply for global retailers in the Southeast Asian region.

The export of Vietnamese goods and products via distribution networks of global retailers remains an efficient and sustainable channel.

Deputy Minister of Industry and Trade Do Thang Hai shared his view at a conference on 5-year review [2016-20] of the implementation of program to promote Vietnamese enterprises’ participation in the global supply chain on December 17.

The conference was held in a virtual platform with the participation of major retailers in Vietnam, including Aeon, Walmart, Central Retail, Lotte, or Mega Market, among others.

“Thanks to their support, Vietnamese high quality goods and products, ranging from agricultural products to household appliances, furniture, and garment, have reached millions of customers worldwide,” Mr. Hai noted.

“The presences of some of the world’s largest retailers from the US, Japan, South Korea and Thailand is evidence of a strong trade and investment relation between Vietnam and its partners, as well as the growing attractiveness of Vietnam’s retail market and its role as a major supply for global supply chain,” he added.

The deputy minister informed over the years, the Ministry of Industry and Trade (MoIT) has been cooperating with retailers in Vietnam in enhancing capabilities for Vietnamese traders, focusing on production capability, product development, market penetration, and connecting buyers and customers.

“After five years of implementing the program, local enterprises have gained better understanding on the necessity of studying customers behavior and preferences in international markets, which would later be incorporated into the process of product development,” Mr. Hai asserted.

Discussing the vision for the program during the next 10 years, Head of the European-American Market Department Ta Hoang Linh suggested Vietnam aims to position itself as a major supply for global retailers in the Southeast Asian region.

In this regard, the country will continue to expand its cooperation with other strategic partners, especially foreign retailers operating in Vietnam or are looking to shift their supply chains to the Vietnamese market, Mr. Linh said.

“The ministry is set to cooperate with business associations and provinces/cities to select high potential enterprises to join the program and propose supporting polices to promote greater participation of local firms into the program,” Mr. Linh noted.

At this conference, the MoIT in collaboration with retailers under the program released a manual to help local traders join the latter’s supply chains. 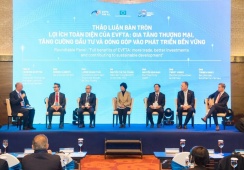