Vietnam continues to stay as an outperformer in the Asia – Pacific region amid the Covid-19 pandemic, stated an S&P expert.

Vietnam is set for attaining a robust economic recovery next year with a GDP growth forecast of as high as 10.9%, while the economic growth in 2020 has been among the highest in the region with 2.3%.

“While a high probability of an earlier vaccine roll-out in the second half of next year leads to more positive growth prospects for the Asia Pacific region, Vietnam remains an outperformer of the region,” said Economist Vishrut Rana from the Standard and Poor’s (S&P).

As the economy stabilizes, consumer activity is coming back gradually in Vietnam and would continue its recovery in the next year, said Mr. Vishrut at a virtual discussion on December 7.

Tourism, which stays an essential part of the economy, directly worth about 6% of the GDP, is expected to face a challenging 2021. “We do not see travel normalizing until at least the third quarter of 2021, and even when this happen, it would be a gradual process to soar up the number of tourists coming in,” he noted.

The S&P’s Economist suggested despite the domestic private consumption would soon normalize, spending on services related to tourism continue to lag behind spending on goods amid the Covid-19 impacts.

The electronics sector, a key driving force for Vietnam’s economic growth, showed its resilient in this year, partly thanks to increase in global demand for technology products amidst lockdowns.

“This sector would continue to outperform other sectors in 2021 and contribute a big part for Vietnam’s economic growth,” he stated.

This came on the fact that Vietnam has become a significant player in technology supply chains over the past 10 years, stated Mr. Vishrut.

“The supply chains in the country are geared towards phone production, but increasingly other technology manufacturing is happening. China remains the region’s tech supply chain hub, but Vietnam is a beneficiary of supply chains diversification since last year and became an important player in the global phone production chains.”

Another key note pointed out by Mr. Vishrut that Vietnam from its insignificant role in the Asia Pacific’s semi-production chain, “now there have been some productions taking place”.

On Vietnam’s economic outlook, Director of S&P’s Asia Pacific Sovereign Ratings Andrew Wood noted despite the fact that the Vietnamese economy is likely to expand at a slower pace this year along with higher fiscal deficit, “the government’s effective control of the domestic Covid-19 situation would help the economy avoid the worst of the pandemic  impact, and the deterioration is generally less than what’s being faced by regional and global peers.”

Mr. Wood added Vietnam’s external position has been powered by strong foreign exchange reserve accumulation over recent years, reaching around US$92 billion as of late August.

“Should global trade and FDI recover at an impressive pace over the next few years, this trend would bolster Vietnam’s external balance sheet further,” stated Mr. Wood.

This year, the Vietnamese government targets an economic expansion in range of 2.5 – 3%, which later rebound to around 6% in 2021. 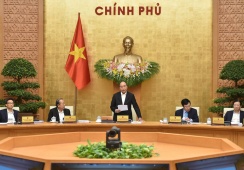