Vietnam gov’t to mobilize US$15.4 billion via bond auctions in 2021

As of January 20, the total value of government bonds reached more than VND16 trillion (US$694.7 million).

The State Treasury of Vietnam plans to mobilize VND350 trillion (US$15.4 billion) by issuing government bonds via auctions at the Hanoi Stock Exchange (HNX) in 2021.

During the implementation process, the State Treasury of Vietnam could adjust the issuance volume of bond maturities to suit the market situation and the government spending.

According to the Government Bond Auction Plan for the first quarter of 2021, the Treasury will issue bonds with total value of VND100 trillion (US$4.3 billion).

As of January 20, the total value of government bonds reached more than VND16 trillion (US$694.7 million).

The Treasury will this year strive to complete the 2021 capital mobilization plan assigned by the Ministry of Finance, comply with the state budget and public debt restructuring towards ensuring sustainable safety of the national financial system.

It will issue a variety of bond tenors for different investment purposes and create reference interest rates for the market, restructure public debt (government bond repurchase and swap) according to the scheme approved by the Prime Minister.

It will pilot the issuance of new types of bonds (green bonds, floating-rate bonds). 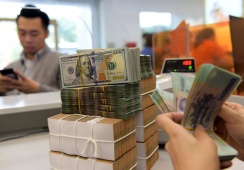