The Vietnamese Ministry of Industry and Trade will be the coordinator for providing information, guidance and clarification of provisions and issues related to the Regional Comprehensive Economic Partnership (RCEP) Agreement.

It is one of the missions under a plan of for rolling out the RCEP signed by Deputy Prime Minister Pham Binh Minh.

The plan assigns tasks and responsibilities to relevant agencies and organizations, on the implementation of this agreement, thereby helping Vietnamese enterprises to make business plans and overseas investment strategies.

The plan tasks ministries, sectors and localities with devising programs to support and improve competitiveness for businesses, especially small, medium and micro enterprises, cooperatives, and farmer households in line with international commitments.

They are also requested to work out policies supporting industries which will be affected by the agreement.

The plan contemplates a series of trade-investment promotion programs in RCEP member countries to present  opportunities and advantages of Vietnam’s business and investment environment.

“It is necessary to continue refining the mechanism to encourage and attract foreign investment, thereby developing trade relations and drawing capital from RCEP member countries in key areas, as well as making use of modern technology to remove bottlenecks that may prevent some industries of Vietnam from taking advantage of this agreement,” the Deputy Prime Minister noted.

These above agencies are tasked with organizing specialized skill training courses for businesses on research and exploitation of the RCEP markets, work out policies to support Vietnamese enterprises in participating in value chains, global supply chains, innovation, digital transformation and sustainable business.

The RCEP Agreement took effect on January 1, 2022. The trade pact was signed by 10 ASEAN members and five ASEAN partner countries on November 2020 on the sidelines of the 37th ASEAN Summit chaired by Vietnam.

The Agreement will officially come into force 60 days after it is ratified by at least six ASEAN members and three other signatories.

As of November 2, six ASEAN countries, including Vietnam and four other nations including China, Japan, Australia and New Zealand had submitted documents ratifying the agreement to the ASEAN Secretariat.

It is expected to multilateralize free trade agreements that ASEAN signed with partner countries, harmonize commitments and regulations in the trade pacts, maximize economic interests, particularly origin principle and trade facilitation, and strengthen regional supply chains and economic recovery in the post-pandemic period.

The agreement, gathering the 10 ASEAN member nations and Australia, China, Japan, New Zealand and South Korea, will cover a market of 2.2 billion people, accounting for about 30%of the world’s population, and a total GDP of $26.2 trillion. 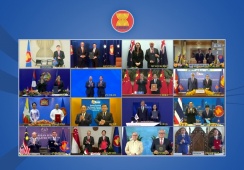