Vietnam, Japan sign cooperation agreements worth billions of US dollars

Vietnam would continue to support foreign businesses, including those from Japan, to expand businesses and gain success in the country, Prime Minister Pham Minh Chinh has said.

Businesses and Government agencies of  Vietnam and Japan signed 44 cooperation agreements worth billions of US dollars.

Prime Minister Pham Minh Chinh attended the signing ceremony, which took place at the Vietnam-Japan investment promotion conference on November 25, the first after two years of disruption due to the Covid-19 pandemic.

Major deals include an electricity plant in Lang Son Province worth US$1.75 billion, a $500 million cattle farm in  Vinh Phuc Province, and an agreement for the development of Dinh Vu economic zone in Haiphong with $250 million.

Prime Minister Chinh noted amid growing global uncertainties and fierce strategic competition among world powers, the Vietnam-Japan relations have been at their best.

Chinh added his visit to Japan is aimed at taking the bilateral strategic relations to a new height, which would create favorable conditions for economic cooperation between the two countries.

In addition, Vietnam’s political stability would help foreign investors settle in the country for the long term, he said.

According to Chinh, the human factor also remains Vietnam’s key pulling factor for investors. “Vietnamese people have valuable traits that could meet foreign investors’ requirements, such as creativity, hard-working, smart, flexible, and being unfazed at difficulties,” he said.

Chinh stated human rights in Vietnam were regulated in Vietnam’s first constitution in 1946, and have been constantly perfected throughout the years.

“The 13th National Party Congress stressed the role of the people as the center and motivation for development,” Chinh said, adding investors coming to Vietnam could be assured of the country’s stance on putting the people at the center of the development process.

“Vietnam would continue to support foreign businesses, including those from Japan, to expand businesses and become successful in the country,” he added.

“Legal imperfection, shortcomings in administrative procedures, and human resources are issues that Vietnam needs to solve,” he said.

In this regard, Chinh expected support from the international community and developed countries, including investors, for Vietnam to finalize the legal framework, train high-quality human resources, promote green growth, enhance state and corporate governance capabilities.

“A long-standing relation built for nearly 50 years would help both countries overcome temporary difficulties and achieve great results in the future,” Chinh stressed, expecting a new wave of investment from Japanese investors to Vietnam.

At the conference, Japan’s Minister of Economy, Trade, and Industry Koichi Hagiuda expressed his thanks for the Vietnamese Government’s efforts in addressing concerns of businesses during the pandemic and maintaining the supply chains.

Hagiuda called for both business communities to strengthen cooperation towards sustainability, climate resilience, and digitalization.

He expected Vietnam to be one of the main beneficiaries of Japan’s Asia Energy Transition Initiative (AETI) worth $10 billion.

In a previous meeting with Chinh, Hagiuda suggested both countries further cooperate in realizing the CPTPP’s potentials and boosting Vietnam’s production capabilities.

The Japanese Minister expressed his confidence in Vietnam’s economic outlook and cooperation potentials between the two, including in digitalization and human resources training. 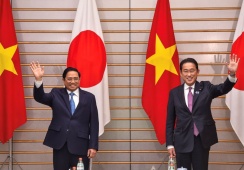 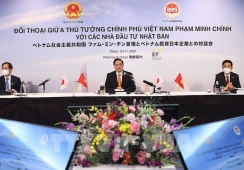 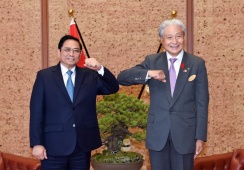