Vietnam-Laos solidarity essential for past, present and future: State President

Despite challenging regional and international situations over the past 60 years, such a strong friendship has been on the rise with substantial benefit for each country.

The Vietnam-Laos alliance and special solidarity remained essential for the fight for independence and later for major achievements in socio-economic development in each country.

State President Nguyen Xuan Phuc gave the remarks in an interview with local media on the occasion of the 60th anniversary of Vietnam-Laos diplomatic relations (September 5, 1962 – September 5, 2022).

According to Phuc, Vietnam and Laos are close neighbors with long-standing relations, saying that the people of the two countries regard each other as siblings and are willing to provide mutual assistance in any circumstance.

“From the close natural and historical connection, both countries shared the same desire for independence and freedom, resulting in the formation of Vietnam Democratic Republic on September 2, 1945, and Lao Issara on October 12, 1945,” Phuc said.

Major victories of the Laos revolution in particular and the Vietnam-Laos fighting alliance, in general, had led to the signing of the International Agreement on the Neutrality of Laos on July 23, 1962, recognizing Laos’ independence and sovereignty.

Two months on, Vietnam and Laos signed an agreement on diplomatic relations on September 5, 1962. “This marked a major milestone in the new development phase of bilateral ties in the modern area, and strengthened the fighting alliance in both military and foreign affairs fronts,” Phuc added.

In the socio-economic development phase, Vietnam and Laos signed the Friendship and Cooperation Treaty on July 18, 1977, showcasing both countries’ strong commitments to cooperation and mutual support in the process of national construction and sovereignty protection.

“45 years on, the Treaty has become a valuable asset serving as a solid legal base for Vietnam and Laos to expand this special friendship and comprehensive cooperation, a foundation for both to sign many agreements in various fields from politics, foreign affairs, security, defense, economy, trade, investment, and education,” Phuc noted.

Phuc added the Vietnam-Laos relations, nurtured by great leaders such as President Ho Chi Minh, President Kaysone Phomvihane, and President Souphanouvong, the sacrifice, sweat, and blood of generations of leaders, soldiers, and people have now become an example for loyalty, sustainability, uniqueness among relations between countries.

Despite challenging regional and international situations over the past 60 years, such a strong friendship has been on the rise with substantial benefits for each country.

Bilateral trade turnover expanded at a two-digit growth rate, for which the figure in the first eight months of 2022 stood at over US$1 billion, up 20% year-on-year.

Vietnam remained the third largest investor in Laos with over 200 FDI projects worth over $5 billion.

Other cooperation in the fields of education, energy, transportation, culture, and healthcare have also been solidified.

Facing the Covid-19 pandemic, both have provided timely mutual support in terms of finance, and healthcare equipment.

“The National Assembly house project as a gift from Vietnam to Laos in 2021 is a symbol of the Vietnam-Laos special relations in the next phase,” he said.

In addition, the recent launch of the Lao-Viet International Port at Vung Ang, Ha Tinh Province, would help Laos promote its maritime economy, while the telecom joint-venture Unitel, which started operation in 2009, has been dominating the Laos market with 57% of total subscribers.

In the coming time, the State President called for both countries to further enhance economic cooperation to reflect the scale of Vietnam-Laos relations, focusing on trade, investment, and business promotion; expand partnership in energy, telecommunication, transportation, and maritime trade.

Based on mutual political trust, Vietnam and Laos should further strengthen cooperation in defense and security to maintain a peaceful environment and protect their respective sovereignty.

In addition, Phuc suggested education and workforce development as a strategic cooperation field and a breakthrough for each country’s development. 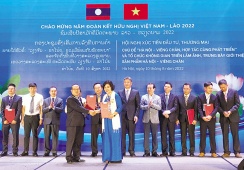