Vietnam is in a favorable condition to take advantage of free trade agreements (FTA) that the country is a part of, as well as growing global demand in the late-year shopping season.

Despite a trade deficit of US$2.13 billion in the first nine months of 2021, it is still possible for Vietnam to reverse the situation and end up with a surplus by the end of this year.

Deputy Director of the Ministry of Industry and Trade (MoIT)’s Import and Export Department Tran Thanh Hai made the point in a press conference on September 30.

In September, Vietnam’s exports stood at $27 billion, down 0.8% against last month and 0.6% year-on-year, which is also the second consecutive month that the country recorded a decline in export growth. Meanwhile, imports went down by 3.1% to $26.5 billion.

This resulted in a trade surplus of $500 million in September, the first surplus recorded after five months of unfavorable trade balance, and helped narrow down the total deficit figure to $2.13 billion in the January-September period.

“Positive trade performance for the first nine months was one of the main contributors to a positive GDP growth in the period,” said Vice Minister of Industry and Trade Do Thang Hai, adding given the current pandemic situation, this shows the strong efforts from local authorities and the business community.

Hai said the serious Covid-19 situation in the past two quarters has posed negative impacts on Vietnam’s major production hubs in Bac Giang, Bac Ninh in the north, and Ho Chi Minh City, Binh Duong, Dong Nai in the south.

“It is estimated that 19 southern provinces alone have contributed 45% of the country’s total exports, so the prolonged outbreak and social distancing measures here have no doubt affected export activities,” he added.

According to Hai, the trade deficit has been on the decline for the past three months from over $2 billion in July, to $100 million in August and a surplus of $500 million in September, which is a positive sign.

Hai suggested Vietnam is in a favorable condition to take advantage of free trade agreements (FTA) that the country is a part of, including the CPTPP, RCEP, or EVFTA, as well as growing global demand in the late-year shopping season.

Hai said an export growth of 18.8% in the nine-month period is significant given such a rate was around 7% for the whole of 2020.

“With three months to go until the end of 2021 and assuming that there was no major Covid-19 outbreak, this would be the period for southern provinces to come back to growth trend and help Vietnam end this year in a balanced trade situation, or even with a surplus if favorable conditions emerge,” Hai said. 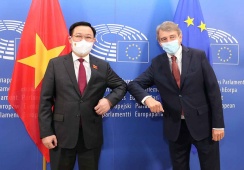