This moment has gone down in history and marked a new milestone in the development of Vietnam's space industry.

Micro-satellite NanoDragon, developed by the Vietnam National Space Center (VNSC), was successfully launched into outer space from Japan at 9:55am (Japan time) on November 9.

The Vietnamese satellite, and eight others of Japan, were carried by the fifth Epsilon solid-fuel rocket at the Uchinoura Space Center, a space launch facility in the Japanese town of Kimotsuki in Kagoshima Prefecture.

According to the Japan Aerospace Exploration Agency (JAXA), the satellites launched into outer space this time are part of JAXA's second "innovative satellite technology demonstration" program.

After about 52 minutes, the fifth Epsilon began dropping the nine satellites into orbit. NanoDragon was the last satellite released into outer space after leaving the ground 1 hour, 11 minutes and 38 seconds.

Vietnamese Ambassador to Japan Vu Hong Nam, who was present at the launching site of Uchinoura Space Center, said that this initial achievement of the Vietnam National Space Centre (VNSC) has marked an important step forward for Vietnam's space industry.

“I was moved to witness the moment when the Epsilon-5 rocket was launched at the Uchinoura Space Centre, carrying Vietnam's NanoDragon satellite into outer space. This moment has gone down in history and marked a new milestone in the development of Vietnam's space industry,” Nam said.

He expressed his hope that the data collected by NanoDragon will be applied to economic development, especially the marine economy, agriculture, forest management, as well as climate change response, and security monitoring.

NanoDragon, a nano-layer cubesat satellite weighing 3.8 kilograms, was developed by the VNSC under the Vietnam Academy of Science and Technology. The development of the NanoDragon satellite is part of VNSC's made-in-Vietnam small satellite development roadmap.

Pham Anh Tuan, general director of the VNSC, said that NanoDragon was developed with a view to demonstrating it could use micro-satellite beam technology to receive the Automatic Identification System signal to track and monitor activities at sea.

"Currently, Vietnam only has signal receiving stations located along the coast and no satellites. When this technology is successful, we can launch more satellites to continuously update signals from vessels in Vietnam’s waters," Tuan told The Hanoi Times.

He added that NanoDragon is designed to operate for a minimum of six months in orbit, and VNSC estimated that the satellite can operate for up to two years.

It was delivered to Japan on August 11 and tested at the Uchinoura Space Centre from August 16-17 before being officially transferred to the JAXA for launching under the second "Innovative satellite technology demonstration" program.

Earlier, the launching of Epsilon-5 thrice was called off three times, on October 1, October 7, and November 7, due to ground radar issues, and unfavorable weather.

On October 1, about one minute before launching the rocket, JAXA stopped the process to check the machinery system. In another attempt to launch the rocket on October 7 and November 7, the agency had to cancel its plan because of unfavorable weather. 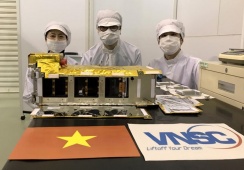