Foreign resources are key for Vietnam in the process of building an independent and self-reliant economy.

Vietnam would continue to open doors for foreign investors in new fields of the stock market, energy transition, digitalization, healthcare, and pharmacy.

Prime Minister Pham Minh Chinh gave the view during a meeting with major corporations and venture capital listed on the New York Stock Exchange (NYSE) on May 16.

“Vietnam is striving to build an independent and self-reliant economy, focusing on global integration with foreign resources as a key driver,” Chinh said.

In this regard, Chinh noted the Vietnamese Government is putting in place measures to ensure a transparent, healthy, and competitive business environment for both local and foreign businesses.

“We expect to gain trust and confidence from businesses for Vietnam’s economy, instead of causing concern and troublesome,” he added.

Amid the ongoing turbulence surrounding the global situation, Chinh noted the Government has been focusing on stabilizing macroeconomic indicators, such as inflation, exchange rate, and budget balance.

The upcoming socio-economic recovery program, estimated at US$15.4 billion or 4% of the GDP, would consist of five components, including economic reopening with a focus on higher healthcare capabilities; ensuring social welfare and job security; supporting businesses recovery; promoting infrastructure development; and improving legal institution and business environment.

“In this process, investment in infrastructure system would bring strategic improvements and new spaces for growth,” he added.

Chinh also stressed the significance of promoting a sustainable and transparent capital market in line with international standards and practices.

Ensuring a favorable environment for all businesses

At the meeting, the representative of Amphenol Corporation, a manufacturer of electronic devices for Boeing, Apple, and Tesla, noted the firm is planning to shift operations to Vietnam and asked for the Vietnamese Government’s vision in promoting investment in the manufacturing and processing sector.

The prime minister noted Vietnam remains steadfast in the approach of sincerity, credibility, and responsibility in attracting foreign investment, for which risks and benefits are equally shared between both the government and the enterprises.

Chinh noted Vietnam continues transposing its international commitments into the national legal system, including 15 free trade agreements that Vietnam is a part of.

The prime minister also stressed the ongoing efforts in improving the business environment with simplified administrative procedures to save time and cost for businesses and people.

“Political and social stability is also a key factor to help businesses and investors stay for long the term in Vietnam,” he added.

Chinh pointed out  Vietnam’s success in containing the pandemic, which showcases the adequate healthcare infrastructure to protect public health, including foreigners.

“Another advantage of Vietnam comes from a hardworking and disciplined workforce,” Chinh said.

A representative of Deutsche Bank said it is working with the State Securities Commission of Vietnam in the listing of companies in stock markets, and asked how the Government may support firms to list in foreign stock exchanges.

The prime minister noted the Government is responsible for supporting the healthy and sustainable development of Vietnamese businesses. In this process, the legal environment is a decisive factor, which requires the cooperation between the Government and businesses to improve.

In turn, local firms should also be active in taking advantage of the favorable business environment to thrive, Chinh said, noting the support from foreign partners, including those in the US, is also essential for Vietnamese companies to go global.

A representative of Goldman Sachs asked about the Government’s stance on expanding the foreign ownership limit in the banking sector.

Prime Minister Chinh said the Government has been instructing Government agencies to further improve investment procedures in the field of banking finance, aiming for greater transparency in banking operations toward international standards.

“Vietnam’s approach, however, is of a developing country and could not be the same as that of Japan, the US, or South Korea. The (banking – finance) market opening, therefore, would be in phases, due to limitations in infrastructure and current policies,” he said. 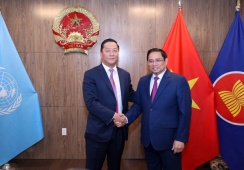 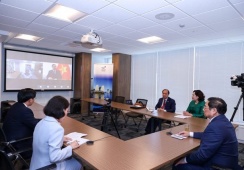