The move aims to release the locally-made vaccines in the shortest time, meeting the increasing demand for vaccination in Vietnam.

Vietnam’s Prime Minister Pham Minh Chinh on August 9 asked the health minister to cut administrative procedures in order to obtain a license for the use of homegrown Nanocovax Covid-19 vaccine, the government said on its website.

But the shortened process must be in line with the law, it stated.

The PM’s order was made in response to a proposal lodged on August 1 by Prof. Nguyen Gia Binh, head of the Association of Emergency, Intensive Care Medicine, and Clinical Toxicology (VNACCEMT) regarding the approval of Nanocovax for emergency use.

Nanocovax, a Covid-19 vaccine candidate developed by Nanogen Pharmaceutical Biotechnology JSC (Nanogen), is a two-dose vaccine under the phase 3 clinical trials lasting from June to August on around 13,000 volunteers.

In early August, the producer has asked the ministry to allow the third step (3c) trials on between 500,000 and one million volunteers.

Nanocovax, developed on the protein-based recombinant DNA technology, began phase 1 clinical trials in December 2020 and has almost finished phase 3 clinical trials. In all clinical trials phases, a few of more than 14,000 volunteers had a strong reaction to the vaccine and none died of it.

According to the producer, trials results and comparison analysis show Nanocovax has around 90% efficacy.

On August 7, the ministry’s Independent Ethics Committee (IEC) gathered to review the trial results, saying that the vaccine is “safe and good in producing immunity” but it has not evaluated the vaccine effectiveness.

Authorized agencies are expected to review the results of the first step (3a) in the phase 3 trials before August 15.

The World Health Organization (WHO) has commenced technical assistance on clinical evaluation and authorization of made-in-Vietnam Covid-19 vaccines on August 4-5 following the agreement between Prime Minister Pham Minh Chinh and WHO Director General Tedros Adhanom Ghebreyesus during a telephone call on June 24, 2021.

Accordingly, more than 80 participants from Vietnam and international independent experts invited by WHO discussed key considerations for clinical trial design and analyses of the Nanocovax.

In another move, the homegrown COVIVAC Covid-19 vaccine developed by the Institute of Vaccines and Medical Biologicals (IVAC) will begin phase 2 clinical trials from August 10.

COVIVAC is developed under the partnership between IVAC, the Mount Sinai Health System, the University of Texas, and the PATH organization.

The trials of 3mcg and 6mcg will be on two groups aged above 18 and above 60. 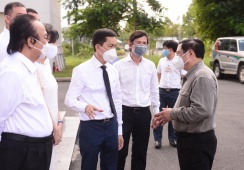 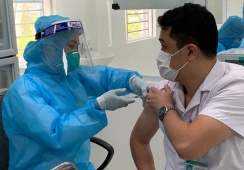