Vietnam continues to show its attractiveness to foreign investors, especially with its portfolio of high-quality projects.

Data from the Foreign Investment Agency (FIA) under the Ministry of Planning and Investment (MPI) revealed as of August 20, total FDI commitments to Vietnam stood at US$16.8 billion, down 12.3% year-on-year.

While the figure remained lower compared to the same period of last year, foreign capital pumped into existing projects or in stake contribution rose by 50.7% and 3.6% year-on-year to $7.5 billion and $2.9 billion, respectively.

The FIA also noted the disbursed amount of FDI capital in the first eight months of 2022 went up by 10.5% to $12.8 billion, the record high number for the eight months.

“This showed the growing confidence of foreign investors in Vietnam’s economic outlook and its business environment,” stated the agency.

The Japanese multinational air conditioning manufacturing company Daikin Industries is rushing to complete its second plant in the fourth quarter of this year, aiming to take advantage of the domestic market recovery by the year-end period.

Once completed, the plant is set to produce an additional of 150,000 products per year for the local market.

“Vietnam is one of the key markets and we are looking to expand production capacity to meet the rising demand. Cheap labor cost and a vast network of FTAs are favorable factors to attract foreign companies coming to Vietnam,” said Vice General Director of Daikin Vietnam Noriyoshi Ogami.

By 2025, Aeon Mall is expected to expand its retail network in Vietnam to 100 supermarkets, 16 shopping malls, and unlimited convenience stores with floor area of at least 500 square meters.

In early August, Japan’s Onaga Company received an investment license for an aeronautical and automotive component manufacturing plant in the Hanoi Southern Support Industrial Park, set to be launched in 2023.

“The local market is of high potential. Every year, Vietnam imports around $100 billion worth of car and machinery parts,” said Onaga President Onaga Masaru.

A recent survey conducted by the Japan External Trade Organization (JETRO) in Hanoi noted that 55.3% of Japanese companies are looking to widen operations in Vietnam during the next one or two years, up 8.5 percentage points against the same period of last year and the figure remained top among ASEAN countries.

The latest Business Climate Index (BCI) released by the European Chamber of Commerce in Vietnam (EuroCham) suggested that 76% of European firms look to increase FDI to Vietnam before the end of the third quarter.

EuroCham Chairman Alain Cany noted that more European companies are looking to expand or set up business activities in the country, especially as the local Government has been pushing for digitalization and promoting green growth.

General Director of Emirates Vietnam Mohammed Alwahedi noted Vietnam’s adjustment in investment policies has resulted in a growing number of high-quality FDI projects in the country, especially in Hanoi and neighboring provinces.

Alwahedi pointed out Apple’s latest decision of moving the production chain of the Apple Watch and Macbook to Vietnam, while others are planning to do the same given the adequate infrastructure and human resources.

Vietnamese Representative of the US-ASEAN Business Council (USABC) Bui Kim Thuy highlighted the timely support of the Government for businesses, which further solidifies Vietnam's position as an attractive investment destination in the region.

According to Thuy, in addition to Apple, Boeing is the latest multinational firm planning to shift its supply chains to Vietnam, a move expected to turn Vietnam into an aviation hub in the region.

“Multinationals are coming to Vietnam due to the country’s strategic location and positive long-term prospects,” Thuy said.

For Vietnam to maintain its pulling factor among foreign investors amid fierce competition from regional countries, Head of the Legal Department of the Vietnam Chamber of Commerce and Industry (VCCI) Dau Anh Tuan suggested the Government set up a task force specialized in identifying drawbacks in foreign investment policies.

“In attracting FDI to Vietnam, projects of high spillover effects should be given priority to support local businesses better integrate into the global value chains,” Tuan said.

The MPI expected the Government would continue to perfect its legal framework to create more convenience for foreign investors; promote the country’s advantage of political stability, and favorable locations, while pushing for improvements in the business environment. 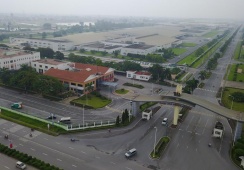