Both sides agreed to step up cooperation in trade, investment, and healthcare.

Vietnam continues to be Austria’s reliable and important partner in Southeast Asia as both countries have huge room to further expand bilateral relations.

For his part, Vietnam prime minister Chinh congratulated Austria for having successfully hosted the fifth World Conference of Speakers of Parliament (WCSP5), while expressing his delight at the achievements gained by both countries which established diplomatic ties nearly half a century ago.

“Vietnam gives priority to its relations with Austria and looks to strengthening the partnership in all spheres,” Chinh added.

Ahead of the 50th anniversary of diplomatic relations (1972-2022), both government leaders agreed to resume high-level exchange activities in 2022 and pushed for greater efficiency in cooperation mechanisms, including the Vietnam-Austria Joint Committee on Economic and Trade Cooperation.

Chinh and Kurz highlighted the progress made in trade, economic, and investment cooperation amid the Covid-19 pandemic, in which Austria stayed among Vietnam’s top 10 export markets in Europe, and is committed to taking advantage of opportunities brought by the EU-Vietnam Free Trade Agreement (EVFTA).

Chinh called for the Austrian Government to continue allowing more seasonal farm produce from Vietnam to enter the market, including fruits, pepper, coffee, or cashew.

Kurz, in response, agreed to help Vietnam strengthen its relations with the EU and in the removal of the yellow card.

Chinh also suggested Austria include Vietnam in the priority supporting list, especially in fields of healthcare, environment, and poverty reduction.

As Vietnam is putting up efforts to contain the fourth Covid-19 outbreak, Chinh urged Austria to share its vaccine surplus and cooperate in the transfer of technology for vaccine production and medicine for Covid-19 treatment.

The two leaders agreed on the necessity to maintain freedom of navigation and security in the East Sea, along with taking peaceful means to resolve territorial disputes, including the 1982 UN Convention on the Law of the Sea (UNCLOS).

On this occasion, Chinh extended an invitation to Kurz to visit Vietnam in 2022 on the occasion of the 50th anniversary of diplomatic relations, which the latter accepted. 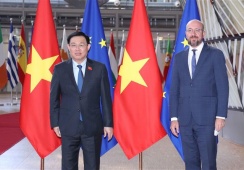 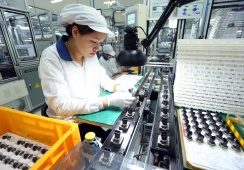