Investment capital from Vietnam to Lao surged by 130% year-on-year in 2020.

This was among significant achievements in bilateral economic cooperation revealed during the 43rd session of the Vietnam – Laos inter-governmental committee that was co-chaired by Prime Minister Nguyen Xuan Phuc and his Laos counterpart Thongloun Sisoulith on December 6 in Hanoi.

In 2020, Vietnam saw a breakthrough in its investment activities in Lao with registered total investment capital of US$143 million, including nine new and existing projects, representing an increase of 130% year-on-year.

Among those are major infrastructure projects, such as the Vung Ang port, Noong-khang Airport, road, railway transportation and Laos’ new National Assembly building, which is scheduled to complete in early 2021.

As part of cooperation strategy for 2021 and the next 10-year period, the two prime ministers also agreed to boost economic cooperation between the two countries, especially in connectivity in trade, infrastructure and telecommunication, while looking for financial means from international partners for joint projects.

“Efficient cooperation between Vietnam and Lao in various fields amid the Covid-19 pandemic is proof of efforts from all parties in bolstering the special Vietnam – Lao relations,” stated Mr. Phuc at the meeting.

The Covid-19 pandemic, nevertheless, has caused negative impacts on bilateral trade with turnover declining 12.2% year-on-year in the first 10 months of 2020 at US$815.5 million. For this year, trade revenue is estimated at US$980 million, down 15.6% year-on-year.

“The government will continue to cooperate with Laos counterpart in creating favorable conditions for Vietnamese enterprises and investors doing businesses in Lao,” stressed Mr. Phuc.

On his part, Mr. Sisoulith emphasized strong Vietnam-Lao relations would further contribute to peace, stability and development of the two countries and the region as well.

Based on a high level of mutual trust, both Mr. Phuc and Mr. Sisoulith stressed the countries would continue to support each other in multilateral forum, especially in ASEAN, sub-Mekong Delta region and the United Nations.

Vietnam and Laos are committed to working with other ASEAN members in the fight against the Covid-19 and pushing for a strong ASEAN Community by 2025. 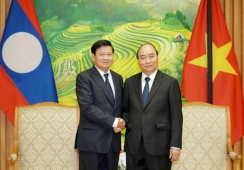