Vietnam and Russia issued a joint declaration on the vision of the comprehensive strategic partnership between the two countries until 2030.

The document was the result of the meeting between Vietnam’s State President Nguyen Xuan Phuc and Russian President Vladimir Putin on November 30.

Under the joint declaration, both countries expressed their support for peace, stability, and prosperity of the region and in the world, while taking into consideration the benefits of each other in bilateral and multilateral cooperation frameworks.

In this regard, Vietnam and Russia would not partake in alliances or agreements with a third party that could undermine the independence, sovereignty, and interests of the other.

The progress of Vietnam-Russia relations would not pose negative impacts on any country, while both sides stressed the commitments to strengthen cooperation in all spheres and expand political dialogues at the highest level.

The inter-governmental committee would serve as the coordinator to boost cooperation in the economy, trade, science, and technology.

Vietnam and Russia consider economic cooperation as the key pillar in the comprehensive strategic partnership, and would further enhance it for mutual benefits and timely address issues if any.

The two sides reaffirm they would ensure greater utilization of the Free Trade Agreement between Vietnam and the Eurasian Economic Union or AEAU (including Russia, Armenia, Belarus, Kazakhstan, and Kyrgyzstan) for trade facilitation among country members.

Businesses from both sides are encouraged to expand investment activities in traditional and new fields of energy, industry, mining, or hi-tech, of which energy and oil are the two focuses for cooperation, including projects with the participation of the Vietnam National Oil and Gas Group (PetroVietnam), Zarubezhneft, Gazprom, Novatek and Rosatom.

Other fields subject for cooperation include industry, forestry, and finance-banking, along with the joint-development of e-government.

The two countries reaffirmed the importance of the 1982 UN Convention on the Law of the Sea (UNCLOS) that lays the legal foundation for all activities on the seas and oceans, as well as cooperation between countries.

There should be greater efforts in the region to build a fair, inclusive, transparent, and open security structure in the Asia-Pacific. Vietnam and Russia oppose any move that could hamper cooperation between countries in the region or the expansion of regional dialogues.

Vietnam and Russia would work together to ensure peace, security, and freedom of navigation in the Asia-Pacific, along with advocating the resolution of territorial disputes based on international laws.

Vietnam as Russia top strategic partner in the region

During the meeting with his Russian counterpart, State President Phuc said Vietnam gives priority to the long-standing relations and comprehensive strategic partnership with Russia, expecting the two countries to further relations in all spheres for mutual benefits.

For his part, President Putin noted the visit of the Vietnamese State President would create the driving force for the bilateral relations, and stressed that Vietnam remains Russia’s top strategic partner in the region.

Both leaders highlighted cooperation in defense and security that contributed to the high level of political trust and aims to turn economic cooperation into the key pillar in bilateral relations.

Phuc and Putin agreed to support the operation of Vietnam’s petroleum companies in Russia and vice versa that stay in line with international law, including the 1982 UNCLOS.

Amid the severe Covid-19 impacts, the two leaders stressed the importance of cooperation in pandemic responses, including the sharing of vaccines and medical equipment.

Discussing the regional and international issues, Phuc welcomed the rising presence of Russia in the region, saying Vietnam is willing to be the bridge for cooperation between Russia and ASEAN as well as other countries in the Asia-Pacific.

The Russian News Agency Tass noted the joint declaration confirms the “mutual intent for further promotion of relations of comprehensive strategic partnership" and highlighted  the intent "for further deepening of bilateral relations and escalation of these relations to a new level."

Meanwhile, RIA Novosti stressed the cooperation between Vietnam and Russia in various fields is significant to both countries, in turn contributing to peace and stability in the region and of the world.

Professor Vladimir Kolotiv, director of Ho Chi Minh Institute under the St Petersburg University, told the Vietnam News Agency the joint declaration reflects the comprehensive strategic partnership of Vietnam and Russia, but more importantly, it lays the foundation for greater cooperation between the two.

Kolotiv noted the vision of both leaders in ensuring freedom and security in the East Sea, adding this is important for prosperity in the region and of the world. 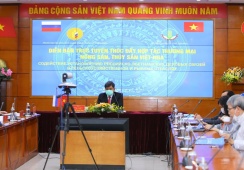