The EU - Vietnam Free Trade Agreement would serve as a driving force for enterprises from Vietnam and the Netherlands to expand cooperation.

Vietnam is seeking further assistance from the Netherlands’ for the agricultural transformation plan in Vietnam’s Mekong Delta in the period 2020–23.

This was one of the key topics in a phone talk between Prime Minister Nguyen Xuan Phuc and his Netherlands counterpart Mark Rutte on November 30.

During the talk, the two leaders expressed belief that the EU–Vietnam Free Trade Agreement (EVFTA) would be a driving force for the country's economy, creating opportunities for businesses from Vietnam and the Netherlands to expand cooperation.

PM Phuc thanked the Dutch government for a support of EUR2 million (US$2.39 million) to Vietnam’s central regions that were hit by recent natural disasters, saying that the two countries would continue to cooperate under the framework of Strategic Partnership on Climate Change Adaptation and Water Management, which was signed between the two countries in 2010.

According to Mr. Phuc, Vietnam gives strong priority to the bilateral relations with the Netherlands and considers the latter as its top partner in climate change adaptation and sustainable agricultural development.

"The Vietnamese Government is willing to cooperate with other countries, including the Netherlands in the fight against the Covid-19 pandemic and boosting economic recovery," Mr. Phuc said.

On this occasion, Mr. Phuc said he looks forward to welcoming the Dutch Prime Minister in Vietnam soon. 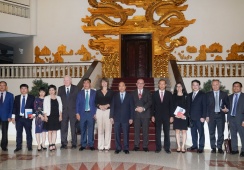