The opportunities for the local firms are huge as the EU remains the second-largest import market in the world with a turnover of $2.16 trillion in 2020.

A key priority for the Vietnamese Government in its push for economic recovery is to make the most use of the EU-Vietnam Free Trade Agreement (EVFTA).

Deputy Minister of Planning and Investment Tran Duy Dong gave the remarks during a conference discussing the impacts of the trade deal on Vietnam’s socio-economic aspects held today [February 25].

According to Dong, the Covid-19 pandemic has inhibited the effects of the EVFTA, for which Vietnam’s exports to the EU suffered a major dip during a time of the pandemic outbreak in Europe.

In April 2020, the exports to the EU were at the lowest among Vietnam’s key markets or a decline of 28.6% year-on-year. This resulted in a 2.7% year-on-year contraction in bilateral trade turnover in 2020.

“A quantitative assessment of the EVFTA impacts in the post-pandemic period for Vietnam is necessary for a country with a high level of trade openness like Vietnam in its process of economic recovery,” Dong said, adding that such a report would be submitted to Prime Minister Pham Minh Chinh for review.

Vice Director of the National Center for Socio-Economic Information and Forecast (NCIF) Luong Van Khoi added the Covid-19 has affected all aspects of life, and in the case of Vietnam, the impacts would be more severe, due to the disruption of supply chains, higher trade costs and lower demands from import markets.

Khoi referred to a study conducted by the NCIF that local firms are facing “double difficulties”, in which 30% suffer from a shortage of input materials, 51% facing drops of new orders, and 48.2% of export difficulties.

For such forecast to turn into reality, Khoi, however, called for the Government to continue reviewing and improving the legal framework, along with a push for administrative reform and improvements in a business environment.

Nguyen Thi Thu Trang, Director of the WTO Center and Integration under the Vietnam Chamber of Commerce and Industry (VCCI), said local firms have recognized and gradually increased their utilization of EVFTA tariff incentives.

According to Trang, Vietnamese exporters sent US$2.35 billion worth of goods to the EU between August and December 2020 using EUR.1 Movement Certificate to enjoy preferential import tariffs, instead of the ordinary Certificate of Origin. The amount exported to the EU under EUR.1 rose to $5.15 billion in the first seven months of 2021.

The exports under EUR.1, however, remain modest, for which Trang called for businesses as main beneficiaries of the trade deal, should be aware of Vietnam’s commitments in the EVFTA to fully take advantage of preferential treatments provided.

“The opportunities for local firms are huge as EU remains the second-largest import market in the world with a turnover of $2.16 trillion in 2020,” Trang said.

“The EVFTA would bring win-win situation given the complementary nature between the two partners, not to mention the pressure it brings for Vietnam to continue its institutional reform,” Doanh said.

For the business community, Doanh expected Vietnamese firms to enhance competitiveness and be active in trade promotion activities.

“Vietnam’s commitments in the EVFTA in terms of sustainable development and promotion of digital economy would create the right environment for the country to access green and modern technologies from the EU,” he stressed. 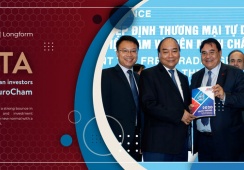