Along with the impressive growth of the country’s tourism, Hanoi’s tourism industry had a strong return in April and May.

Vietnam’s inbound tourism has gained impressive results thanks to the fact that the country has fully opened up to tourism, international flights have been restored and the 31st Southeast Asian Games (SEA Games 31) in Hanoi.

In the first five months of the year, international visitors to the country increased by 4.5 times over the same period of 2021, according to the latest data from the General Statistics Office.

Among the arrivals, those coming by air increased by 6.3 times year on year, the number of those reaching by road rose by 47%, and by sea declined by 50.8%.

In May, international visitors to Vietnam increased by 70.6% against April and 12.8 times over the same period of 2021.

Revenue from accommodation and food services in the five-month period increased by 15.7% interannually thanks to a surge in travel demand. In addition, SEA Games and its sideline events helped the industry’s revenue increase by 69.3% in May.

Tourism revenue in the past five months also increased by 34.7% year on year due to the strong recovery of tourism activities and SEA Games 31.

Along with the impressive growth of the country’s tourism, Hanoi’s travel sector had a strong rebound in April and May, especially on the occasion of SEA Games 31.

In May, the number of visitors to Hanoi was estimated at 1.88 million, up 16 times over the same period of 2021, of which international visitors were estimated at 85,000. Revenue from tourism was estimated at VND5.7 trillion (US$244.9 million), an increase of nearly 18 times compared to last May.

In the first five months of 2022, the city received approximately 6.53 million visitors, a more than double increase compared to the same period last year, of which international visitors were estimated at 126,200. Total revenue from tourism was around VND18.9 trillion ($812.2 million), twice as much as a year earlier.

To seize the “golden opportunity” coming along with the regional sporting event, Hanoi organized a series of unique tourism events during the SEA Games 31 to promote its image as a safe and attractive destination among domestic and international visitors.

Nguyen Hong Minh, Deputy Director of the Hanoi Department of Tourism, said the city considered SEA Games 31 an important event, and an opportunity for the capital’s tourism to speed up the process of the recovery with a bigger contribution from the inbound market. 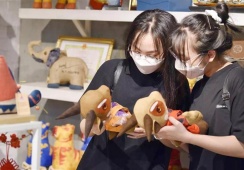