Vietnam exported products and goods to over 80 markets in Tet holiday, with China being the largest buyer by spending US$189 million on Vietnamese commodities, or 26% of total exports.

Vietnam’s trade turnover during the week-long Tet (Lunar New Year) holiday [February 10-16] surged 53% against the same perios last year to US$1.67 billion, according to the General Department of Vietnam Customs (GDVC).

Upon breaking down, the country’s exports were estimated at $730 million and imports of $940 million, representing increases of 79% and 37%, respectively, against 2020’s Tet holiday.

Among Vietnam’s major export staples during this period, phones, electronics products and computers made up a lion share at 80% of total export turnover, posting corresponding figures of US$332 million and US$251 million, respectively.

Meanwhile, the country mainly imported computers and electronic products during the seven-day period worth US$538 million, or 57% of total imports, followed by phones and parts with US$153 million, or 16%.

Vietnam had export products and goods to over 80 markets during Tet holiday, with China being the largest buyer by spending US$189 million on Vietnamese commodities, or 26% of total exports.

As of February 16, Vietnam’s trade revenue increased sharply by 31% year-on-year to US$74.51 billion with a trade surplus of US$2.63 billion, around the same figure of trade surplus for the first quarter of 2020.

Vietnam posted an all-time high trade surplus of US$19.1 billion in 2020, far exceeding the record figure of US$10.9 billion in 2019. This was also the fifth consecutive year that the country recorded a trade surplus, and a second year in a row with a trade turnover of over US$500 billion. 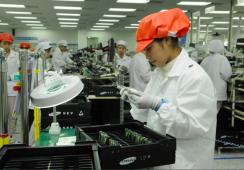