The establishment of communication channel under the agreement is instrumental in the fight against trade frauds and illegal transshipment, said Deputy Minister of Finance Vu Thi Mai.

Vietnam and US on December 6 signed an agreement to boost customs cooperation, creating a legal basis for efficient and smooth relations between the two countries’ customs authorities, stated Vietnam’s Ministry of Finance (MoF) in a statement.

The agreement reiterated Vietnam’s stance on actively integrating in the world economy, and is part of the efforts to realize its commitments in various free trade agreements (FTAs) for trade facilitation, added the MoF.

US Deputy Chief of Mission in Vietnam Caryn R. McCelland said after 25 years of diplomatic relations, Vietnam and the US have now become “reliable and responsible partners”.

Deputy Minister of Finance Vu Thi Mai expected the agreement to help customs authorities in the two countries timely identify trade fraud activities, which is a significant issue amid growing trade relations between the two countries.

Mai added the establishment of communication channel under the agreement is instrumental in the fight against trade frauds and illegal transshipment, preventing losses to state benefits and ensuring fair and safe business environments.

Following the signing, Vietnam and the US would proceed with respective procedures to ratify the agreement.

In 2018, bilateral trade reached US$60 billion, along with growing investment activities by US investors in Vietnam.

Deputy Minister of Finance Vu Thi Mai added Vietnam and the US are scheduled to celebrate the 25th anniversary of establishment of diplomatic ties in 2020, marking achievements in bilateral relations a wide range of fields from economy, culture, to security.

Vietnam gives top priority to its comprehensive partnership with the US, which is evident through the former’s efforts to address shortcomings in the economic and investment relations with the US,  creating favorable conditions for US companies to access the Vietnamese market. 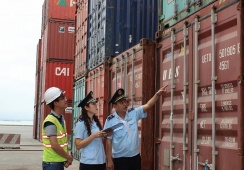