Localities should prioritize public investment in the infrastructure of transport, electricity, water, and telecommunications.

Preferential mechanisms and policies will be key factors to attract the domestic and foreign industrial enterprises' investment in border areas, with a focus on promoting cross-border trade, combating smuggling and trade fraud, and creating a healthy environment.

It is one of the measures given by Minister of Industry and Trade Nguyen Hong Dien at a related conference held on August 16 in Hanoi to tap into the potentials of border trade in the coming time.

Therefore, he underlined localities should prioritize public investment in the infrastructure of transport, electricity, water, telecommunications, upgrade and open new pairs of border gates to facilitate business and cross-border exchanges with bordering countries.

Vietnam should select large-scale export products to the Chinese market, then plan growing areas, and promote commercial infrastructure compatible with the border area, she emphasized.

Tran Anh Thu, Vice Chairman of the An Giang Provincial People's Committee, raised the issue of actively integrating transport infrastructure between the central and local area and building connections to border-gate economic corridors across the country. It is necessary to consider the border gate economic zone at the regional level, he said.

According to the Asia-Africa Market Department under the Ministry of Industry and Trade, up to now, 26 border-gate economic zones have been established in areas sharing borders with Laos, Cambodia, and China.

Some 267 industrial clusters are operating in border economic areas nationwide in a total area of nearly 8,800ha. Le Hoang Oanh, Director General of the Department said, however, the economic development in border areas still faces many difficulties.

"The economic structure in the border area is still based on agriculture, there is no centralized production area, no standards, traceability, branding, and no production-consumption chain," she said.

Industrial production has not yet created key products and has weak competitiveness." 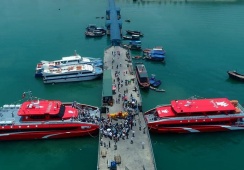