Vietnam’s leadership renewal marks a combination of experience and freshness, a suitable formula for Vietnam’s planned transition towards developed status by 2045.

Vietnam’s new set of leaders comes from requirements of the actual situation and are expected to adopt a more open-door policy for greater modernization of the local economy.

Economist Daniel Mueller at the German Asia-Pacific Business Association (OAV) was quoted by the Vietnam News Agency (VNA) as saying.

According to Mueller, the country’s new State President [Nguyen Xuan Phuc], Chairman of the National Assembly [Vuong Dinh Hue] and Prime Minister [Pham Minh Chinh] are all pragmatists and result-oriented, adding he expected the Vietnamese government would continue to boost for the industrialization process with higher labor productivity.

Mueller said as the country aims to accelerate the digital transformation process, administrative costs would soon be reduced.

While the Covid-19 pandemic showed the significant impact of digitalization for economic recovery, the German economist said Vietnam would focus its resources for the adoption of new technologies, including AI or big data.

Prime Minister Chinh with his experience gained from working in various positions, would carry out the ongoing works from his predecessor to streamline the government apparatus for greater efficiency, Mueller added.

Under the “Indo-Pacific strategy”, both Germany and the EU expect to further their relations with the Asian region, including ASEAN, and Vietnam has a good opportunity to prove itself as an attractive partner and a bridge to connect ASEAN with the world, he stated.

Meanwhile, Wolfgang Bork, an expert on administrative law and a member of the Germany – Vietnam association, said both the old and new governments of Vietnam are having major responsibility in the Covid-19 fight.

As the country has gradually contained the pandemic, its economy would continue to grow along with higher income per capita.

The Singapore-based S. Rajaratnam School of International Studies (RSIS) published an article from author Yang Razali Kassim stressing the leadership renewal in Vietnam marks a combination of experience and freshness, calling it a “suitable formula for Vietnam’s planned transition towards developed status by 2045.”

Kassim expected General Secretary Trong will continue to oversee the fight against corruption where his success has been proven, while State President Phuc will “leverage on his experience as prime minister to expand and strengthen Vietnam's relations with other countries.”

The biggest attention will be on Prime Minister Chinh, “whose decisiveness is seen as a quality needed for a head of government.”

“He will have the unenviable task of steering the country towards the dual goal of rolling back and containing the pandemic while maintaining and promoting economic growth. For the new leadership, this goal is foremost,” stated Kassim.

In addition, foreign policy under the new team is likely to continue the strategy of “openness, multilateralization and diversification.”

International economic integration will continue with more free trade agreements (FTAs) being signed, thereby creating new impetus for the nation’s economic recovery. On the other hand, Vietnam’s diplomatic foray will continue to deepen following its chairmanship of ASEAN in 2020 while its entry into the UN Security Council as a non-permanent member for one year has raised its voice on the global stage, Kassim wrote.

By the end of the National Assembly's elections on April 8, the new Vietnamese core leadership will be ready to take over. This new “Group of Four” ─ communist party veterans backed by a set of younger leaders ─ will steer Vietnam towards a more prominent regional role, concluded Kassim. 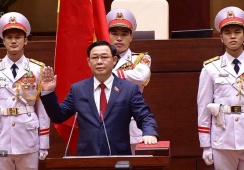