The Vietnamese National Monument Certificate is a special honor for Thang Long Tu Tran - the four most sacred temples in Hanoi.

The Thang Long Tu Tran cluster of monuments or Four protectors of Thang Long including Bach Ma Temple in Hoan Kiem District, Voi Phuc Temple and Quan Thanh Temple in Ba Dinh District, and Kim Lien Temple in Dong Da District has recently been recognized as special national relics thanks to their many important historical values.

The ceremony to receive the Certificate of Special National Monument of “Thang Long Tu Tran” - Voi Phuc and Quan Thanh Temples was organized by Ba Dinh District's authority in Hanoi on May 19 with the participation of Deputy Prime Minister Vu Duc Dam, Chairman of the municipal People’s Committee Chu Ngoc Anh, and leaders of the Ministry of Culture, Sports and Tourism as well as Hanoi people.

At the ceremony, Anh shared his joy with the people and authorities of the Ba Dinh district. He also called on the district to protect, preserve and promote the value of the historical relics in the area.

He stressed that Vietnam’s cultural heritage is a valuable asset to the Vietnamese ethnic community and is a part of the cultural heritage of mankind, playing a great role in the cause of nation-building and defense.

And so, the Law on Cultural Heritage, which came into force on January 1, 2002, needs to be strictly adhered to.

Since earning the status of the nation’s capital in 1010, the ancient Thang Long Imperial Citadel or Hanoi today has withstood the test of time thanks to the four sacred protectors who are currently worshiped at four temples in the four cardinal points of the city.

These four sacred temples are the Bach Ma Temple guarding the East of the Thang Long Imperial Citadel; the Quan Thanh Temple securing the North; Voi Phuc Temple protecting the West, and Kim Lien Temple watching over the South.

Each of these temples embodies a story with its own historical, cultural, and architectural values, showing the thousands-year-old tradition of worshiping national heroes of the Vietnamese people.

Among these four sacred temples, Quan Thanh Temple is the most famous. According to historians, the temple was also built in the 1010s to protect the north of today’s capital. It worships Tran Vu Genie who was believed to help Hung Kings (regarded as the founders of the nation) expel invaders and assist the people in the fight against evil ghosts and natural disasters.

The temple stands now on a high mound south of the zoo with a nice view of a large beautiful lake and is surrounded by gardens and many luxuriant ancient trees.

It was heavily damaged under French colonialism and rebuilt later. The remaining objects of the relic site today are two elephant statues kneeling in front of it. 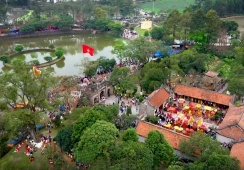 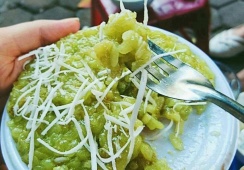 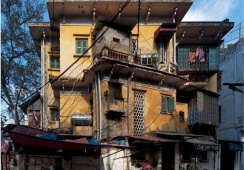 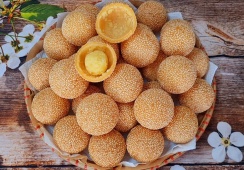