Vietnam stays top of Group G after winning Malaysia in the hard-fought match.

Vietnam had a hard win against Malaysia on June 11 in a crucial match for both at the 2022 FIFA World Cup Asian Qualifiers.

The opening goal was scored at the 27th minute when Nguyen Tien Linh made a header from Doan Van Hau’s line which was resulted from a corner while the other was settled in the net by captain Que Ngoc Hai’s penalty at 82’ to take his side 2-1 until the match ended.

The two goals secure the lead of Group G for the Golden Dragons at the Asian Qualifiers of the FIFA World Cup Qatar 2022 and AFC Asian Cup China 2023 after seven matches, including five-win, 17 points.

Malaysia brought them level at the 72nd minute by Guilherme de Paula Lucrécio who got a penalty after Doan Van Hau jumped into Rasid as he was trying to claim a long ball.

The result bags Vietnam a two-point lead for the match against the UAE on June 15 while Malaysia stays fourth with nine points and faces Thailand in their final tie.

Harimau Malaya entered the match against the Golden Dragons with the must-win spirit to seek three points to take a chance of finishing in the top two places in Group D.

In the pre-match speech, Tan Cheng Hoe said “The previous results have not gone our way but we have to figure out what is the best way for us to get a positive result against Vietnam. As a coach, the next game is the biggest match for me and the team. After a few times of not getting a result against Vietnam, definitely, we have to try our hardest to get a positive result this time around,” according to Goal.

“I’m sure all my players have the ambition to do that. I never mention to them that this is a do-or-die mission but of course my players are very motivated and they know the situation that we need to get a result against Vietnam to continue our run. I’m sure each and everyone in the team has the same dream to do well in this World Cup campaign”, he emphasized.

Meanwhile, Vietnam’s head coach Park Hang Seo said “We still have two more matches ahead. Vietnam will not be immersed in victory. Stronger efforts are required in order to win the next game. Quang Hai’s suspension will allow him to recharge energy and get fully fit for the UAE clash, towards the best result with the whole team.”

“I believe that Tien Linh will continue to display his instinct in the next match,” he noted.

Tien Linh proved himself Park’s best choice once again in the match.

In the post-match speech, Park said “I don’t know what the final result will be because of the UAE match ahead, but three points for us is a step forward. If these three points bring Vietnam into the final qualifying of the World Cup which Vietnamese fans want, then that’s my pride. Thanks to the players, they fought to the last second,” reported VNExpress. 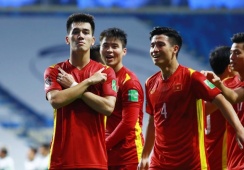