The history of making paper fans in Chang Son village, about 30 kilometres from Hanoi, dates back to hundreds of years ago.

Chang Son village, located at the Chang Son commune, Thach That district, is long known as the most famous craft village in making paper fan.

The history of making paper fan in Chang Son village dates back to hundreds of years ago. Today, the way people making paper fan is vastly different with that in the past. Chang Son’s paper fans are famous not only at home but also abroad, including Japan and South Korea, with different types and versions.

In addition to paper fans, artisans in Chang Son also make fans of bamboo, rattan and silk in different sizes. Notably, many picture fans have length up to few meters, while the silk fans are often used by art troupes, in festivals, or as souvenir for tourists.

A more luxurious version of checkered fans is used as an interior decoration hung on the wall of houses, creating a unique atmosphere to the surrounding areas. Famous fan making artists include Duong Van Doan, Nguyen Duc Lan and Nguyen Tuyet Lan.

The art of making fans not only helps bring a steady stream of income for local people, but also plays a key role in preserving and promoting the traditional craft village of Hanoi. 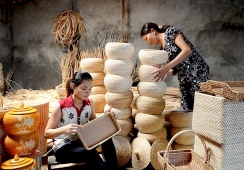