The Vietnamese Government has called on the business community to develop social housing projects and make suggestions to remove difficulties and obstacles in the implementation of projects.

About 1.2 million apartments under social housing projects will be built for Vietnamese low-income earners and workers from now to 2023.

This is the commitment of local businesses participating in the conference to promote social housing development for low-income earners and workers, which was chaired by Prime Minister Pham Minh Chinh in Hanoi on August 1.

Prime Minister Pham Minh Chinh said enterprises who have registered to construct 1.2 million apartments (apts) from now until 2030 need to fulfill their commitment, adding the Ministry of Construction is required to draft a social housing development plan for low-paid workers this August.

The Prime Minister said that one of the major concerns of the Party and State is the living standards of the lives of workers and low-income earners as housing is one of their basic rights, which include the right to work and have a place to live, and the pursuit of happiness. Therefore, the Party and State have adopted many policies on housing and other social welfare programs for these people.

So far, some 7.8 million square meters of social housing have been built across the country, providing accommodation for hundreds of thousands of workers and low-income people. However, as Vietnam is still a developing country and in the process of transition, the need for housing has not been totally met, the Prime Minister stressed.

At the conference, Construction Minister Nguyen Thanh Nghi said that the development of social housing for workers is one of the key contents of socio-economic policies, which set out the construction of affordable housing for low- and middle-income households and those working in industrial parks and export processing zones.

Nghi also outlined a number of solutions to accelerate the development of social housing in the coming times, according to which, the Ministry of Construction strives to complete the projects that are already in execution by 2025 (156 projects with 156,700 apts) and finalize the investment procedures for 245 projects with 300,000 apts, as well as continuing to launch new projects.

By 2030, the ministry will complete the construction of one million apartments for industrial park workers.

The Minister of Construction requested provincial-level authorities to review and supplement the planning, arrange the land portfolio for the development of social housing in urban areas in accordance with the law as well as strictly comply with the regulation of setting aside 20% of the land portfolio for social housing in urban development projects.

He also called for the participation of the business community in the development of social housing and make suggestions to remove difficulties and obstacles in policy implementation.

According to a plan for social housing development in 2021-2025, the city needs an estimated VND12.5 trillion (US$538 million) to build about 113,000 apts of social housing for low-income people in urban areas and industrial parks, totaling about 6.8 million square meters.

The city expects to complete 19 social housing projects with 1.2 million square meters in the 2021-2025 period, and another 38 in execution after 2025. The number of projects which are being implemented is 57.

Tuan also put out three solutions related to investment and construction policies to implement the plan, including encouraging industrial park infrastructure investors to work with trade union institutions in the process of forming new industrial zones.

Besides, the city is revising the planning of industrial parks and export processing zones to find land portfolios for social housing projects, he added. 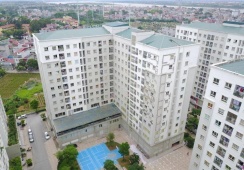 Hanoi approves the mission of planning the social housing project