The Vietnamese tech giant recorded 13 large deals with a scale of more than U$5 million per deal in the first six months of 2022.

FPT, the Vietnamese technology group, maintained high growth in revenue and pre-tax profit in the first half of 2022.

The main driving force came from increased demand in the technology segment, especially digital transformation services, and growth in the profit margin of the telecommunications segment.

Turnover from digital transformation projects was VND3.5 trillion ($149.3 million), an increase of 64.6% over the same period, thanks to the constantly increasing demand in the market.

The agreements were aimed at a number of key goals such as: renewing the growth model and economic structure in association with the implementation of strategic breakthroughs in the province and contributing to the province becoming one of the leading localities in terms of digital transformation in all three areas: digital government, digital economy, and digital society.

The technology sector (including domestic and global IT services) continues to play a key role, contributing 57% of revenue and 45% of the pre-tax profit of the corporation, equivalent to VND11.2 trillion ($477.7 million) and VND1.6 trillion ($68.2 million), respectively.

In the global market, the total revenue from IT services reached VND8.6 trillion ($366.8 million), up 29% over the same period in 2021. Notably, revenue grew in all markets, especially in the US (up 48.4%) and Asia-Pacific (up 55.5%). The Japanese market also witnessed a rapid recovery with revenue growth reaching 18%.

Growing demand for technology education led to education segment revenue rising 42% in the first half of 2022 compared to the same period last year, equivalent to VND1.9 trillion ($81.1 million).

In its annual general meeting of shareholders in April, the group announced its goal of reaching revenue of $1.8 billion and $331 million in pre-tax profit in 2022. 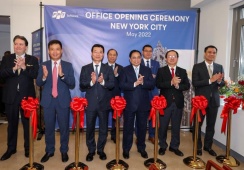 FPT opens new office in New York, 10th in US