The machine was manufactured by German firm Herrenkecht based on the Tunnel Boring Machine (TBM) method.

Part of a boring machine made by Germany has arrived in Hanoi to build the underground section for the city's second metro line, Nhon-Hanoi Railway Station, according to the Hanoi Metropolitan Railway Management Board (MRB).

The MRB said on November 9 that the components of the machine had arrived at Hoang Dieu port in northern Hai Phong city, about a two-hour drive east of Hanoi, in late October.

It is estimated that the assembly of the excavator would take two months, so drilling on the route of the Nhon-Hanoi train station can begin in January 2021.

The machine was manufactured by German firm Herrenkecht based on the TBM method. It stretches more than 100 meters, weighs over 850 tons and has a rotating cutting wheel with a diameter of 6.55 meters. The machine is designed to drill 10 meters of tunnel per day.

According to MRB, the complex apparatus includes a cutting rotor, propulsion cylinder and waste (including soil and rocks) transportation system.

To take the components down to S9, the first of the four underground stations on the Nhon – Hanoi Railway Station route along Kim Ma street in Ba Dinh district, the MRB will employ cranes with a loading capacity of 500 tons to move them one by one.

All the components will be assembled on the site at S9 station to commence work on the four-kilometer underground section of the route, named Metro Line No. 3 though it is currently only the second in the city to start construction after Cat Linh-Ha Dong.

It will run 8.5 kilometers on elevated tracks through eight stations and the remaining four kilometers underground. 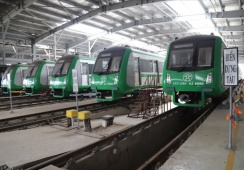