In the next ten years, Vietnam would have urban hubs of national and regional levels that are comparable to urban cities of ASEAN-4 (Indonesia, Malaysia, Thailand, and the Philippines).

Hanoi and Ho Chi Minh City (HCMC) are envisioned to become dynamic and creative metropolitan cities that are highly competitive at regional and international levels, as well as have a key role in Southeast Asian urban networks.

“Both would operate under the model of smart city and serve as gateways for Vietnam to connect with the region and the world.”

Vice Minister of Planning and Investment (MPI) Tran Quoc Phuong gave the vision at a consultation workshop held on July 26, discussing Vietnam’s draft national spatial masterplan for the 2021-2030 period, with a vision for 2050.

According to Phuong, the main objective of the master plan would be to mobilize resources for the development of key economic corridors and zones with high potential to support overall economic growth.

“The development must ensure its sustainability along with effective utilization of land and natural resources, along with environmental protection, preservation of cultural and historical values, biodiversity and climate resilience,” Phuong said.

Phuong stressed the importance of the plan in achieving Vietnam's goal of becoming an upper-middle-income country with a modern industrial sector by 2030 and a developed one by 2050.

In the next ten years, Vietnam would have urban centers of national and regional levels that are comparable to urban cities of ASEAN-4 (Indonesia, Malaysia, Thailand, and the Philippines); completing the national urban infrastructure framework connecting with North-South and East-West economic corridors, key economic zones and transport hubs; realize sustainable development goals on resources, environment, and climate adaptation.

“Urban economy contributes around 70% of the total GDP,” Phuong added.

The highlight of the process has been the formation of metropolitan areas around Hanoi and HCMC, along with urban clusters spreading across the country and along the economic corridors of North-South, East-West, and coastal lines.

Phuong added that the main industrial zones are concentrated in the southeastern region and the Red River delta while the Mekong Delta would be home to mass farm production.

The MPI’s representative, however, acknowledged that urban development has been hindered by administrative boundaries and the lack of provincial linkage.

“Cities/provinces only focus on their own development, rather than cooperate with neighboring localities to boost growth,” Phuong said, pointing out the lack of long-term vision in the construction of industrial parks, and economic and tourism zones.

A shift in the planning approach

World Bank Country Director for Vietnam Carolyn Turk stressed the significance of completing the full draft masterplan before submitting it to the Prime Minister’s office.

According to her, the formulation of a first-ever national spatial master plan, following the Planning Law (2019), is a tremendous and complicated task, especially as the exercise aims at shifting the master-planning approach for integrated spatial development at national and regional levels— moving from provincial perspective to an area-based and inter-provincial, and transboundary perspective; and from a sectoral to a multisectoral perspective.

Turk noted as the spatial masterplan should reflect the Government’s development vision for the country’s future, it should ensure a balance among objectives, “particularly between efficiency and equity considerations.”

“It will be critical to ensure that the Medium-term Investment Plans are strongly linked, prioritized, and sequenced in a results-oriented manner to improved national and regional spatial development masterplans, within the credible forecast of budget affordability," Turk said.

Turk also highlighted the importance to have an appropriate institutional and regulatory framework for the implementation, as this would help enhance vertical and horizontal coordination and regional investments between central-local and local-local governments, as well as an effective public investment process, from selection to disbursement.

Leipziger expected more investment capital would be allocated to bolster connectivity between small and metropolitan cities, rather than to create a whole new economic corridor.

He called for Vietnam to take advantage of the competitive edge of each region and city in the implementation process. 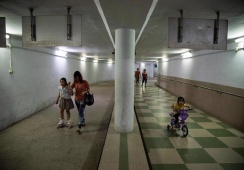