The showroom serves as a focal point in promoting the domestic consumption of local farm produce and contributing to the development of cooperatives and businesses in Hanoi and other localities.

The Hanoi Cooperative Alliance has launched an exhibition center for farm produce from cooperatives and businesses in Hanoi and neighboring cities/provinces.

The launch of the center is aimed at promoting products from members within the alliance while creating a platform for local companies to introduce products and goods of high quality to customers.

The center, located at the headquarter of the Hanoi Cooperative Alliance at 217 Tran Phu, Ha Dong District, drew the participation of 50 cooperatives and business members in Hanoi and other cities and provinces of Haiphong, Thai Nguyen, Nghe An, Bac Giang, Ha Giang, and Bac Kan. Which, over 300 farm produce and processed food were displayed, with the majority being at 3- and 4-graded stars under the One Commune One Product (OCOP) program.

The Hanoi Cooperative Alliance expected the showroom to serve as a focal point in promoting domestic consumption of local farm produce, eventually contributing to the development of cooperatives, and businesses in Hanoi and other localities.

“Such an event would also deepen cooperation between cooperative alliances from different provinces/cities,” said a representative of the Hanoi Cooperative Alliance.

Director of the Dong Thai Service Cooperative in Ba Vi District Phung Quoc Luong expressed his delight that the cooperative’s agricultural products of potatoes and cucumbers, both rated as 4-star under the OCOP program, would have an opportunity to access consumers in Hanoi, in turn opening a new distribution channel for these products.

Do Huy Chien, Chairman of the Hanoi Cooperative Alliance said in the past years, the alliance has been active in promoting trade activities for members.

“Throughout the supply-demand matching events, the public is more and more aware of the high-quality farm produce,” said Chien, adding such activities have also changed the mindset of cooperative members in better understanding the market demand.

Among the ranked products, there are about 400-500 rated as five stars during the period. The country will prioritize upgrading at least 50% of OCOP products as well as promoting others in association with building brands and developing rural tourism services.

In line with the national strategy, Hanoi aims to promote the development of OCOP products in the city, in which the local authorities expect to complete the assessment and rating for at least 2,000 OCOP products by 2025.

In this regard, each district and town are expected to build at least one center for creative design, introducing and selling OCOP products as well as promoting craft villages associated with tourism.

The city also targets to have 100% of shopping malls and supermarkets selling OCOP products, as well as at least 50% of OCOP producers trading in modern sales channels such as supermarkets, convenience stores, and e-commerce platforms.

In the immediate future, Hanoi will prioritize upgrading specialties and traditional craft villages as well as assisting in the branding of certified products.

In 2021, the city completed the evaluation and classification of 595 OCOP-labeled products, exceeding the set target of over 400 ones. So far, the city has had a total of more than 1,500 OCOP products since the program was launched by the Prime Minister.

In the whole country, more than 7,000 OCOP products have been rated with OCOP three stars or more so far. The national OCOP program has to date had more than 4,000 participants. 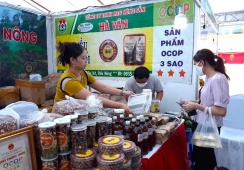 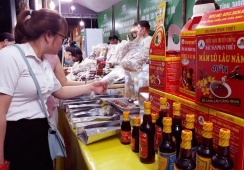 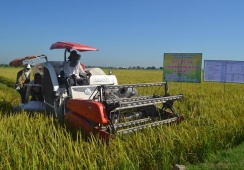 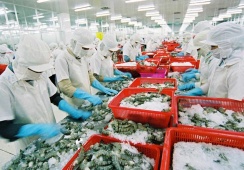