The award-winning photo features women in non la or conical hats and colorful Ao ba ba (the traditional garment in the southern region) harvesting waterlilies. The photo was snapped in Moc Hoa District, Vietnam’s Mekong Delta province of Long An.

“There are many tourists who come to southern Vietnam to experience the feeling of boating along the rivers... and they can see these images,” the organizer stated.

Waterlily can be found everywhere in Vietnam, but the flowers proliferate in the Mekong River Delta area. The vivid white and purple flowers are not only ideal for adorning the house, but also a rich source of food for local residents.

According to photographer Khanh Phan, the best time to shoot the photos of waterlily is in the morning. After nine o’clock, its petals will close slowly, hiding a part of the flower’s beauty. Thus, she arrived at the pond before the night, waiting until dawn for taking the best shots.

“Vietnamese traditional trade villages are my favorite themes for creation,” Khanh Phan told The Hanoi Times “Foreign tourists are always astounded to see the beautiful images that are hardly found in their countries.” “Some traditional trade villages of making incense in Hue city, planting waterlily in Mekong River delta or planting Lotus in West Lake in Hanoi are photographers’ endless source of inspiration,” she added.

Some 200 award-winning photos taken by Khanh mostly depicted Vietnamese traditional trade villages. The photo of waterlilies entitled Flowers on the water earned Khanh a prize in the People category of the SkyPixel Aerial Photo & Video Contest 2019. Another flower themed photo- Washing waterlilies- won the People category of the Drone Siena Photo Award 2019. Meanwhile, the Incensing work was on the list of ‘Top 50 finalists of the AGORA Awards 2019’ - the biggest photography contest in the world.

Founded in 2018, MIPA Photography Award is a premier photo award striving to share and promote the art and passion of photography at all levels across the globe. The platform provides photographers of all levels of expertise a chance to share their passion with the world. The award aim to bring people together and connect different cultures through the power of photography.

Some outstanding aerial shots of Khanh Phan are below: 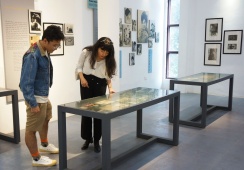