Vietnam expects a fair and just energy transition, ensuring benefits for both investors and local people.

At the meeting, both sides agreed on the significance of international cooperation and a global approach to addressing climate change, as the world is now facing increasing pressure from weather extremes.

In the case of Vietnam, Prime Minister Chinh noted the Government is pushing for the realization of its commitments at COP26, including the ratification of a national strategy on climate change response until 2050; a plan for methane emissions reduction; an action plan to reduce carbon and methane emission within the transportation sector; a national action plan for green growth during the 2021-2030 period.

According to Chinh, Vietnam identifies the goal of net zero carbon emission and a transition from fossil fuels to renewables as an inevitable trend, saying this is also in the interests of the Vietnamese people.

“While internal efforts are essential, international cooperation in this regard would bring a breakthrough solution,” Chinh said.

The prime minister requested the UK and other international partners during the negotiation of establishing just energy transition partnership to support Vietnam in terms of finance and technologies.

In this regard, Chinh expected development partners to transfer technologies to renewables development; help Vietnam promote the development of an industrial sector for manufacturing renewable equipment; support the establishment of a map on the country’s potential for wind and solar energy.

Meanwhile, Vietnam is looking for loans at preferential rates, along with supporting mechanisms to keep the charging rate affordable to the income level of the locals.

Chinh also stressed the fact that Vietnam is among the most vulnerable countries to climate change, energy transition, therefore, is a major concern for the Party and Government.

“The Government would consider a roadmap for gradually reducing Vietnam’s dependence on coal-power that is suitable with the country’s own characteristics and the support level of international partners,” he said.

For his part, President-Designate of COP26 Alok Sharma expressed his delight to return to Vietnam for the third time in the past 18 months.

He highlighted the efforts of the Vietnamese Government in realizing its commitments at the COP26 and said he would send the prime minister’s message of justice and fairness in energy transition, and climate change response to development partners.

Sharma expected a declaration on the establishment of just energy transition partners would be approved on the occasion of the COP27 in Egypt by later this year.

* On the same day, Chairman of the National Assembly Vuong Dinh Hue held a meeting with the President-Designate of COP26 Alok Sharma.

At the meeting, Hue reaffirmed Vietnam’s determination to realize its commitments at COP26, including the net zero carbon emission target by 2050.

“This is part of Vietnam’s objectives in energy transition, green growth, and address climate change issue while demonstrating the responsibility of Vietnam as a member of the global community,” he added.

With energy transition seen as a critical process for Vietnam in pursuing green growth, Hue said Vietnam is looking for experience from developed countries in this regard.

Stressing the key issue of fairness, Hue expected a political declaration on the establishment of just energy transition partnership would include strong commitments from the UK, EU, and other partners for Vietnam’s long-term and sustainable development. 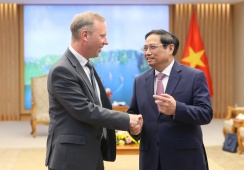 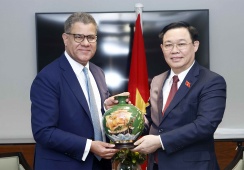