In the medium term, Vietnam’s vision to become an upper-middle-income economy will depend on its ability to evolve from its current growth model to productivity and innovation-led growth model.

Vietnam’s economy is expected to grow by 5.3% in 2022 from a modest 2.58% last year, and thereafter stabilize at around 6.5% in a scenario with eased mobility restrictions domestically and internationally.

The vaccination of over 78% of the population facilitated the adoption of a “Living with Covid-19” strategy and the opening of the economy in the fourth quarter of last year.

However, Vietnam is experiencing a surge in infections related to the Omicron variant in the first quarter of 2022 and will be affected by the global effects of the Russia-Ukraine conflict, noted Mattoo.

In the medium term, Vietnam’s vision to become an upper-middle-income economy will depend on its ability to evolve from its current growth model to productivity and innovation-led growth model. The government’s institutional capacity to shepherd major structural reforms will be a key lever in this transition, which will need to focus on building a digitally transformed, greener, and more resilient economy

In 2021, inequality in both monetary and non-monetary dimensions is expected to increase, compounding the increase in inequality that occurred because of the Covid-19 crisis in 2020.

Households in the bottom 20% of the population experienced the slowest income recovery into the first quarter of 2021 even before the lockdowns in the third quarter. Poor households were less able to cope with the impact of income shocks and were more reliant on external sources such as borrowing.

Mattoo noted that poverty reduction is expected to resume in 2022 assuming GDP growth recovery to pre-Covid rates, but the impact of the crisis may have longer-term effects on rising inequality.

Challenges for East Asia and the Pacific region

Looking out in the region, the World Bank report suggested the ongoing conflict in Europe, economic distress caused by the lingering Covid-19 pandemic, the fiscal tightening in the US, and the pandemic resurgence amidst zero-Covid-19 policies in China are issues that threaten the recovery of the East Asia and Pacific region.

“Just as the economies of East Asia and the Pacific were recovering from the pandemic-induced shock, the war in Ukraine is weighing on growth momentum,” said World Bank Vice President for East Asia and Pacific Manuela V. Ferro. “The region’s largely strong fundamentals and sound policies should help it weather these storms.”

While commodity producers and fiscally prudent countries may be better equipped to weather these shocks, the repercussions of these events will dampen the growth prospects of most in the region. Overall economic growth is projected to slow to 5% in 2022— 0.4 percentage points less than expected in October. If global conditions worsen and national policy responses are weak, growth could slow to 4%.

China, which accounts for 86% of regional output, is projected to grow 5% in the baseline and 4% in the downside scenario.

The war, financial tightening, and China slowdown are likely to magnify existing post-Covid difficulties. Struggling regional firms, more than 50% of which reported payment arrears in 2021, will be hit by new supply and demand shocks.

Households, many of whom fell back into poverty during the pandemic, will see real incomes shrink even further as prices soar. Indebted governments, who have seen their debt as a share of GDP increase by 10 percentage points since 2019, will struggle to provide economic support. Increased inflation, at least 1 percentage point above previous expectations due to the oil price shock alone, will shrink room for monetary easing.

“The succession of shocks means that the growing economic pain of the people will have to face the shrinking financial capacity of their governments,” said Mattoo. “A combination of fiscal, financial and trade reforms could mitigate risks, revive growth and reduce poverty.” 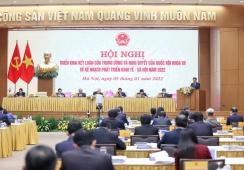